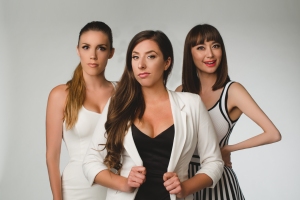 An interview with Sara Vickruck.

“The Seminar will help you Breakthrough and make-over your life. You have been handed the short end of the stick in life; you eat right, exercise, and work hard but still aren’t happy. Is this your fault? NO! Come discover how our Breakthrough program can take you from drab to fab when you, CHOOSE TO CHANGE.” This faced-paced, satirical-comedy will have you in stitches while you contemplate the life you idolize.

***** The ensemble work, basic theme, premise of the show – that it’s a seminar

The Seminar: Breakthrough is inspired by your 2011 show, The Seminar. What inspiration did you take from your previous show into this one?

Both The Seminar and The Seminar: Breakthrough, are satirical social commentaries on our current culture. Both shows also use the same premise, the audience is cast as average folks who are attending a seminar. Holding true to the majority of Poiema’s past productions, we are also committed the ensemble work and co-creation.

While our 2011 show focused a lot more on plastic surgery, and was a little darker, and more grotesque, this years show gets rid of the masks and large asses. Trading them in for seduction and the sheer truth. There is one particular monologue in the script that has been almost word for word pulled from a cosmopolitan magazine, and it will make you cringe. This years show has a lot more polish, in the performances, and content. We have all grown as artists and Kenneth Brown has really helped us take our script and production to the next level.

The Seminar focused on themes of societal attitudes towards beauty and, specifically, cosmetic surgery – what themes or ideas did you want to explore in The Seminar: Breakthrough?

The themes we explore with The Seminar: Breakthrough are, the shallowness of pop culture and the social alienation of reality television

Your original show – and I’m assuming this one too – is staged as though the audience is attending a seminar. Why put the audience in that role? How does it contribute to their understanding of what you want to convey?

We cast the audience as participants in a live taping of a reality TV show, encouraging them to cheer and engage with us. This helps us create a level of meta theatre. We want people watching the show to make parallels between their real lives, we want them to have honest reactions, and hopefully feel wrong about joining in and participating with us.

We want the audience to know that they are going to love this show! There is a bit of offensive words hurled across the stage so we recommend the show for 14 years plus. This is a great show for people who would rather be home watching a comedy on Netflix, but people who are easily offended may want to stay home and watch Netflix.

NAME DROP! Kenneth Brown, and Candice Fiorentino, who was nominated for a sterling for her performance in Anatolia Speaks.