The Seven Lives of Louis Riel 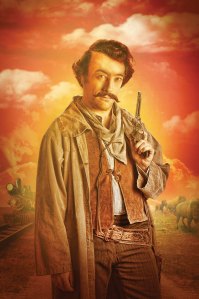 An interview with Ryan Gladstone.

It’s a play about a guy trying to write a play about Louis Riel. His aim is to try and sift through all the conjecture and controversy over the man and see if he can find out who the real Riel really is.

What inspired you to write a show about Louis Riel?

In one of our very first plays The Canada Show: The Complete History of Canada in One Hour, we had a scene about Louis Riel which I had researched and found fascinating. He is truly one of the most debated over figures in history; no one agrees on what kind of a person he was. I am very much interested in the malleability of history, how someone’s image can shift over time Louis is the exact prime example of that. All of our history shows reveal history in a new light. We like to call them ‘re-imaginings’ of history.

How did you choose the perspectives from which the various ‘lives’ are told from?

They are all based on legitimate research. Every single angle is defended by at least one historian. Believe me, it wasn’t difficult to find alternate views on Louis Riel.

Through the process of creating this show, what is your favourite thing you’ve learned about Louis Riel?

One of my favourite elements of the show is the part where I ask the audience if they have any questions, and we end up in a bit of dialogue about Louis. Performing the show in the prairies where so much of his life took place, it is always exciting to find people passionate and knowledgeable about Louis.