Tourology: A Mindy and Marge Adventure 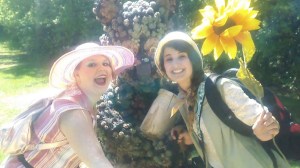 An interview with Rachel Smith.

Prepare your fanny pack and charge your selfie stick! We’re going on a tour, not just any tour, one featuring the hidden gems of the French Quarter! Mindy and Marge are such expert travellers that they believe they can lead a tour in any city! They will even share their wisdom with you, so you too can become expert travellers. Come walk with us rain or shine!

Tell me about Tourology‘s character’s Mindy and Marge? Who are they and how were they created?

Marge is a book worm and an adventurer who has trekked through many jungles and is not afraid to get her hands dirty.

Mindy likes to go on her own adventures to the markets. She never leaves home without her selfie stick and can be seen moving from one patio to the next to test out who has the best margaritas.

Mindy and Marge are travel buddies who have travelled the world together and believe that they are expert travellers. In reality they are not the sharpest duo. They are typical tourists wearing fanny packs and sunhats that you might see in any city.

They were developed last year for another fringe show, but the characters were so loved, that they were brought back to do their own tour. The characters were inspired by Commedia dell’Arte and by ignorant tourists we have observed while travelling. Marge was created as a cross between Martha Stewart meets Indiana Jones. Mindy was inspired by tourists who frequent on cruises.

I’m aware that Tourology: A Mindy and Marge Adventure isn’t a “typical” walking tour and that you’re touring the show through various cities, so what are you looking for when you’re first scouting or checking out your tour route?

We are looking for buildings and places that may be of interest for tourists. We use Google Maps to plan out our route and do research about what some of the surrounding features of the area are. We look for opportunities to have fun as our characters and to show audiences a different view of their city.

Tourology satirizes the tourism industry – could you tell us a little about what in particular you’re poking fun of?

We poke fun of a few different aspects of the tourist industry. Mostly we look at the tourists themselves. We have seen the travellers with the selfie sticks, the fanny packs and the ones who make a spectacle of themselves. We have observed many tourists who have made us wonder how they make it home without getting all of their stuff stolen.

We also look at the trust between tour guide and tourist, that the tourist will believe anything the tour guide tells them. There are certain trends in the tourist industry (particularly for young adults) that we poke fun of, however, we do not want to reveal this before you see the show.

We will lead the tour rain or shine. Bring umbrellas, ponchos, rubber boots, fisherman jackets… whatever you need to protect you from the elements.