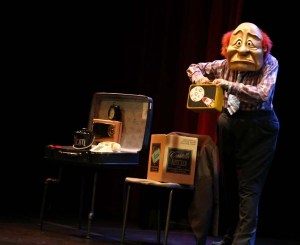 An interview with Kate Braidwood.

LOON is the story of Francis, a lonely janitor who is plagued by isolation and searching for love. He doesn’t have any luck through earthly means, so instead, he falls in love with the moon. The show is performed in full-face mask, which is a wordless, whimsical style of theatre – like a living cartoon.

LOON is the winner of four Critics’ Choice Awards, three Best of Fest Awards, and described by the CBC as “Pure magic”, and we’re very excited to be bringing it back to Edmonton audiences.

Last year, you said that the cartoonish features of the masks that the WONDERHEADS wear helps adult audience members connect to your stories on a more metaphorical level. What are the metaphors that you’re exploring in Loon?

LOON is as much a story about hope and loneliness as it is about love. When we created the show, we thought a man falling in love with the moon served as a lovely metaphor for the experience of love, letting go, and how some of the magic of that experience will always stay with you.

Loon is returning to the Edmonton Fringe Festival. For those who have seen it before, will it be a chance to relive the magic of the first time they saw it, or have some new elements been incorporated into the show?

We haven’t made any major changes to the show, but we’ve done some tweaking as well as added some new technical elements which we think add to the magic of the show. And it was a fairly new show when we brought it to the Edmonton Fringe in 2012, so it’s definitely tightened up over the last few years of touring it around North America.

The key is that he’s a janitor at a movie theatre. Francis is a lonely, anxious guy, but he’s also quite earnest and hopeful – a daydreamer. And this movie theatre plays classics like Casablanca that he adores and immerses himself in imaginatively. He gets to be that invisible guy at the back of the movie theatre imagining himself as Humphrey Bogart.

I think some folks have a hard time imagining that a mask with a fixed expression can convey a full story and emotional experience. But is really is pretty magical, and one of the most frequent comments we get from our audience members is that the mask truly comes to life. It technically holds a fixed expression, but you will be amazed at how you will see it shift expressions, change emotions, and tell a story with full emotional range. You have to see it to believe it! Also, it’s funny, too. I’ve just realized that so far is sounds like quite a serious show, but it wouldn’t be a Wonderheads show without some humour and irreverence!

There’s a piece of music we use throughout the show which people often ask about. It’s a beautiful cello piece called ‘Denmark’ written by Gideon Freudmann and played by the Portland Cello Project, and we’re so honoured that Gideon and PCP have allowed us to use it in our show. Give it a listen – you’ll love it.