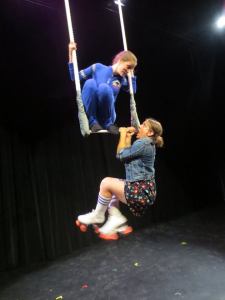 An interview with Zita Nyarady.

Describe your show in five words:

Susannah Bird is a story about falling, flying, regret and acceptance performed entirely on trapeze. Susannah has to tell you everything and she doesn’t have much time. With a broken parachute and seconds ticking away, she knows exactly what is about to happen, and there’s not a thing she can do about it, except wait for her life to start flashing before her eyes. Somehow, the only thing she can remember is that summer before eighth grade, with the carnival, her “best” friends and the one thing she never wanted to see again.

There is one minute until Susannah hits the ground.

What is a ‘static trapeze’ and why did you decide to have Suzannah Bird performed entirely on it?

There are a number of different kinds of trapezes that are used in the aerial world. Flying trapeze, which is what people think of most often when they hear the word, involves flying and catching across two trapezes. Swinging trapezes are rigged to operate like a swing set. The static trapeze, also known as a fixed trapeze – what we’re using – is where the ropes mainly stay in place, and the aerial artist manipulates themselves around the apparatus.

The playwright, director and actor are all active in the aerial arts scene in Toronto. We decide to have Susannah Bird performed entirely on trapeze, as we wanted to investigate ways to physicalize Susannah’s free falling experience and faced the question: how can one accurately describe the process of falling from a plane, with little hope of survival, without becoming didactic or hyperbolic? We chose the trapeze as we realized that we could manipulate the lines and bar to transform it into a broken parachute, a tree, a carnival ride, and any other ‘set’ that we needed to create.

You say in your press release that Suzannah Bird began as playwright Natalie Frijia did some ‘polite eavesdropping’ on a man talking about his experience jumping from a plane. What was it about that story that resonated with Natalie and what about it stuck with her as she wrote Suzannah Bird?

Playwright Natalie Frijia says “I was helping out at a theatre festival when I overheard two people talking about skydiving. One of the people was quite experienced in the skydiving world, having been an instructor at one point in her life. The other had just gone skydiving for the first time, and was describing how alive he felt within the moment. Two things stuck with me about this. First of all – I’m not afraid of heights… but the thought of jumping from them terrifies me. I wondered how much of this heightened feeling of being alive while free-falling was influenced by the possibility that, if anything went wrong, death could be only a minute or so away. Now, this instant opinion was highly informed by what little I knew of skydiving at the time – the horror stories reported any time there is an accident. Through further research, I came to realize that these accidents are quite rare and skydiving is highly-regulated and much safer than one would assume. But the juxtaposition of heightened aliveness and potential for disaster stuck with me most, and I thought that would be an interesting situation to explore within a play.

The second thing that stuck with me was the woman who was speaking about having at one point been a skydiving instructor. I later came to learn that she was one of only a few women in the school, and this struck a personal chord. My own experience with what most would consider an extreme sport comes from bicycle touring, where I have cycled across Canada and a few other countries. Where I have felt most alive is when I’m zooming down mountain roads at 70km/hour. At the end of every single trip, most often, I’m asked if I worry about being abducted or assaulted because I am a woman traveling alone. I’m generally asked this by other women, and when I started bike touring, I didn’t often encounter other women on the road (though I know they’re out there!). With Susannah Bird, I really wanted to create a strong female adventurer character with this piece – like the woman I overheard in this conversation about skydiving – someone who is tough, cognizant of risks, and chooses a life of exploration and pushing the limits, even though she may be one of the few women doing so. ”

Suzannah Bird has a lot of physicality in it – what are the challenges of creating a piece that’s so rooted in one’s body experiences and how have you overcome them in this production?

The physicality of Susannah Bird is essentially a balancing act while ‘flying’ on a trapeze. In creating the physicality of this story, we needed to balance the spectacle elements of aerial trapeze work, with the narrative elements of storytelling, to incorporate dynamic movements which would further the story and not become solely about the spectacle, or vice versa. Much of the challenge in creating Susannah Bird was in finding this balance.

Our show is unique in that it is not entirely a drama, or a storytelling show, or a circus show. It is a fusion of narrative theatre, storytelling, and aerial circus, and balancing act between these elements.

We would like to thank the following people for their immense contributions to this show: Joanne Galligan, Emily Hughes, Rebecca Leonard, Jacob McLean, Kristian Reimer, Eva Szabo, Cirque-Ability, Collective Space, Hercinia Arts, Rhubarb Festival at Buddies in Bad Times Theatre, and Dorris. For this production specifically, we want to send a special thank you to Annie Dugan and Firefly Theatre and Circus in Edmonton, who have allowed us to rehearse a new version of the script in their studios before Fringe.