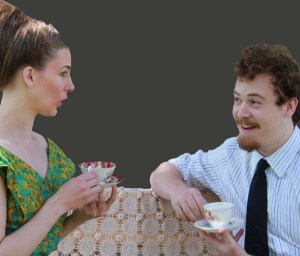 Pacific Time is a time-travel romance drama evolving as a bit of a mystery. Two young people are inside a cozy cafe enjoying its great old-fashioned vacuum perked coffee and sticky buns to die for. Only the cafe has a secret – time and space there wobble a bit. Take a wrong turn coming out of the washroom and push through the back door marked exit, and you’ll find out how much! Eventually, as their interest in one another progresses into love, the cafe’s mysterious side confronts the twosome with an unexpected, terrifying barrier to a happy future. They confront that fearsome challenge with courage and integrity. Ultimately, the play is about the potential of the human spirit when confronted by overwhelming adversity.

This production of Pacific Time will be the second time it’s been staged – what are you most looking forward to about getting Pacific Time in front of Fringe audiences? What did you learn about the show when it was staged at the Graffiti Mix One Act Festival?

Playwrights write works to be staged and seen. The Fringe will be a longer run in front of a potentially far more numerous audience. I attended all three performances at Graffiti Mix. People followed the story and audience reaction was positive. I felt that the play was suitable for the Fringe, and from the Graffiti Mix experience I knew I had a Director and cast who could do a good job there.

What drew you to wanting to write a show that involves time travel?

I was a fan of old-time science-fiction back when it was still new (I am now 71). I particularly enjoyed time-travel stories, but felt they needed limits on the ability of the time travellers to alter the future. Some authors of that time felt that way also. Good science-fiction is not about gee whiz gadgetry or super-duper warriors zooming about confronting malignant beings. The sci-fi medium allows human beings to be tested by challenges outside “real” world boundaries. And that is what this play tries to be about.

How do you deal with the logistical complexities of a show that deals with drastically changing settings caused by time traveling? At a 50 minute run-time, that’s not a lot of time for scene changes!

There are no scene changes. The play takes place entirely within the setting of the cafe, which occupies what is termed an “interstice” between two places and two times, in a fixed relationship. The cafe’s two doors are portals to these different times and places. The cafe furnishings, and its staff, do not arouse suspicion amongst newcomers who do not yet know of the cafe’s oddity.

As part of its ongoing refinement, Pacific Time went through Edmonton’s Script Salon in early June. This is a venture now in its second year, sponsored and supported by the Playwrights Guild of Canada, the Alberta Playwrights’ Network (of which I am a member), and Holy Trinity Anglican Church. It is run by veteran Edmonton playwrights David Belke and Katherine Koller. Pacific Time was read aloud to an audience by three experienced professional actors.

As Resident Playwright at Holy Trinity Anglican Church, David Belke was I assume involved in the decision to accept it for staging at one of that church’s Fringe BYOVs.