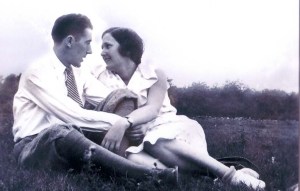 Sam and Brownie. Photo used with permission from Susan Freedman.

An interview with Susan Freedman.

Love story with many laughs.

At 11 I snooped into my parents old love letters for about half an hour and then got caught by my mother. Fifty-five years later, the letters are mine and they inspired me to write a Fringe show using them as the centre piece. The letters are romantic and funny and touching. They provide a stark contrast to my own checkered marital career. Spilling Family Secrets is a love story that will make you laugh and might even bring a tear to your eye.

Spilling Family Secrets is your fourth one-woman show – what draws you to that performance style?

There are not a lot of parts for women my age. There are many shows telling stories of the angst and joys of being 20, or 30 but not many about being 70 plus. This show is not at all about issues of age, but my previous three did address aging. They’ve all been comedies. And, if I write the show, I get to tell my stories exactly the way I want. And I get the lead!!

You read the love letters Spilling Family Secrets draws from 55 years ago. What stuck with you about those letters?

When I read the letters at 11 I just thought they were hilarious – and embarrassing. I didn’t remember anything about them except getting in trouble for reading them.

Spilling Family Secrets is, in part, a tribute to your parent’s relationship. How have (or would) your family members or family friends reacted to the show?

My sister saw the show five times in Toronto last year and my brother saw it in Winnipeg. They both really liked it. I was a bit nervous ahead of time though as to what their reaction would be.

My parents love letters filled 75 pages – single spaced – when I transcribed them in 2012. I did it because Brownie and Sam’s 80- year- old letters were too fragile to pass around and I wanted a record of their love story for the family. The letters were long, intimate and wonderful to read. But I do Fringe shows, so I wanted to use the letters in a show. Reading letters on stage is a challenge so I edited – a lot. I hope what’s left gives you a flavour of Brownie and Sam’s personalities and their relationship. I hope too, that it puts you in mind of your parents or your grandparents – or some other couple you may know who really did fall in love forever…

I have a wonderful Dramaturg, Lucia Frangione who is a terrific playwright and my Director, Rondel Reynoldson is outstanding. My husband, Bill Galloway is my slide technician and has been either Stage Manager or Slide Technician on all four of my shows. He is my biggest supporter.