It’s no secret that rehearsal and performance space in Edmonton is difficult to find, and one of the ways Punctuate! Theatre is making the most of the situation is by presenting all six of the plays in George F. Walker‘s Suburban Motel series not over the course of a season as they were first presented, but all together between April 29 – May 11.

Punctuate!’s Artistic Director Liz Hobbs says, “We lost the space we were in before… We can’t afford to rent to space and it’s hard to find space in this city more than once, so we thought maybe we’ll do a smaller project but that sucks because we’ve worked with so many artists over the years… so what can we do? And Sheiny Satanove, our Artistic Producer was like, ‘We should do all six of the Surban Motel plays.’ And I said that’s a terrible idea, we’re not doing that and then wrote it off, but a few months later I read all of them again and I was like, ‘Damn these are good plays.’ But still it was like, there’s 26 characters, this is madness. I just didn’t think it would be possible and then sleeplessly at 2:00 a.m. I went through all the plays and wrote out diagrams and tested out rehearsal processes to figure out whether we could actually do it… I basically drew diagrams and created charts for three hours in the middle of the night and was like, ‘It’s possible!’ ”

So, that’s what Punctuate! is doing – from rehearsing in a former psychiatric hospital to taking on the logistics of six plays, 15 actors, three directors, a production team of 27, and 30 performances in 13 days – it’s indie theatre at its most innovative.

A collection of six dark comedies, George F. Walker’s plays all stand on their own and can be performed individually, but Liz says what ties them all together beyond taking place in the same hotel room is, “Each character is in a transitory place and they’re fighting to get some place else… What ties the plays together is the idea of struggle for survival – they’re all struggling to survive in whatever way they need to. [The plays are] very funny, but they’re also very dark. The cool thing about them is that most theatre doesn’t put these people on stage. These types of characters, these types of humans, if they’re in a play they’re a secondary character. They’re the obstacle character as opposed to who you’re actually rooting for.”

George F. Walker’s characters themselves are written realistically, but Liz Hobbs says presenting all six of the Suburban Motel plays together adds the context that makes it, “difficult to dismiss any of the characters as, ‘Oh, they made their own choices so now they’re screwed.’ Because they’re all so different from each other, but they’ve all ended up in the same place: at the bottom of the barrel, fighting for respect and power and money and basically just trying to find some place better.” 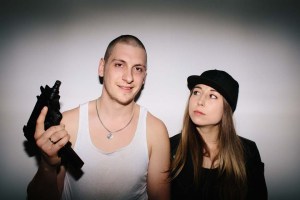 “To me, I think I want all of the plays to be based in being true to these characters and being honest and not playing any of them as stereotypes or as comedies. I want people to laugh, obviously because they’re funny, but I also want them to get punched in the heart a little bit by certain characters… I would love an audience member to be moved and relate in some way to somebody they might not relate to in everyday life.”

Liz gives us an overview of each of the six plays in the series:

The Suburban Motel series runs April 29 – May 11 at C103 (8529 Gateway Boulevard). There are several different ticketing options through Tix on the Square: single ($22), double bill ($32 for both performances on a single evening), flex pass ($83.50 for six mix-and-match performances throughout the run), and a marathon pass ($78.50 for all six shows on a single Saturday). Pay-what-you-can performances are May 4, 5, and 6 and are followed by talk backs on breaking the poverty cycle, safety of sex workers, and crime and deviance.

Of the marathon days, May 2 and May 9, Andréa says, ” With Netflix available to everyone, we live in this binge-watching culture and so I think a lot of people find it attractive that they can binge watch six plays in one day and have a catered meal in-between…And then you can binge with friends rather than alone on your sofa!”

PS – check out the What It Is podcast’s episode 69: The Suburban Cormack Series, featuring interviews with the creative team.