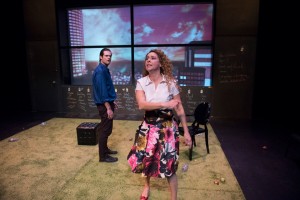 Have you ever heard the child-friendly version of Rapunzel’s story? (Not to be confused with the Brothers Grimm version, which is, of course, terrifying.) If you haven’t heard of it or need a refresher, the short version involves a young girl who has grown up locked away in a tower by an evil witch until one day her true love hears her singing and comes to rescue her. She escapes and they live happily ever after. At least, that’s the version I grew up with.

If you’re a child, maybe it seems romantic. But it’s more than a little creepy when you find yourself in the very modern adult version of it in Jean et Béatrice, playing at La Cité Francophone until April 5.

Béatrice (played by France Perras) has posted an advertisement announcing that she’s a young heiress willing to offer a substantial reward to a man who can interest, move, and seduce her – in that order. Jean (Steve Jodoin), a bounty hunter, appears at her door ready to wile her out of that “substantial reward”. Over the course of Jean et Béatrice we learn that Béatrice’s posting is more than just an elegantly-worded personal ad.

Unlike Rapunzel, Béatrice locks herself inside a room on the 33rd floor of an abandoned building in a haven of bottled water, apples, daydreams that completely overwhelm her, and a stream of sayings that could be taken straight from one of Cosmopolitan’s “How to get a man” articles. Lured by the treasure Béatrice has promised, Jean unwittingly starts tackling what he thinks are harmless challenges, but turn out to be the methods Béatrice believes will make Jean fall in love with her.

Carole Fréchette’s script is engaging – drawing the audience in further and further until we eventually realize that what’s playing out is a really twisted version of one of those fairy tales where, as long as the woman does certain things, her one true love will realize that he’s in love with her and they’ll live happily ever after. Although there’s no intermission in the 90 minute show, about halfway through there’s a very clear moment when the fun and games switch to something much darker and we find ourselves with a woman who’s not so much peculiar rather than desperately trying to do what the unidentified “they” told her she needed to do to find love.

I occasionally spend time reading and thinking about what effect the media I saw as a child, especially Disney movies, has had on my life and the lives of the people with similar childhoods as me. Having gone full princess dress for my high school graduation and having spent a significant amount of time unlearning those lessons on how to fall in love that are so prevalent in Disney movies, I recognized a lot of myself in Béatrice. I think that a lot of people my age are in the same situation – just look at the extension of the Disney brand into wedding dresses. The ideas Jean et Béatrice presents about love, especially in relation to expectations of each partner are presented in a way that brings in to light how ridiculous they really are.

As Béatrice, France Perras was an interesting mix of extremes – one moment she was a woman whose body seemed much too old for her childlike mind and the next moment she was a stubborn con artist. At first, France’s character is childlike and a little endearing, but when Béatrice’s true motivations – falling in love no matter what – start to take over the show, we watch France transform into someone whose childlike belief in fairy tales has become all-consuming. The beauty of France’s acting and Carole Fréchette’s script is that you don’t realize how strongly she holds these fairy tale/”happily ever after” beliefs until it’s too late and Jean finds himself trapped in Béatrice’s fantasy – us along with him.

As her counterpart Jean, Steve Jodoin plays a dramatic opposite to France: he is the cold, emotionless victim of Béatrice’s trap, who’s really only there for the money – not the connection or the seduction that Béatrice assumes he wants more than he wants the reward. At first, Jean is much more in tune with the dynamics of the situation, but eventually through his reactions and concern about the situation that is as apparent in his words and tone as it is in the tension of his body, he leads us to see the true dynamic between the characters.

The only real complaint I had about Jean et Béatrice was that towards the end of the show, when Béatrice’s games and charade were reaching the end, the play started to feel a little nihilistic and repetitive, which dampened the impact of the other questions it raised for me.

As with all L’Uni Théatre productions, Jean et Béatrice is presented in French with English surtitles. The show plays at La Cité Francophone March 25 – 29 and April 1 – 5. Tickets are $22 – $26 through L’Uni Théatre.