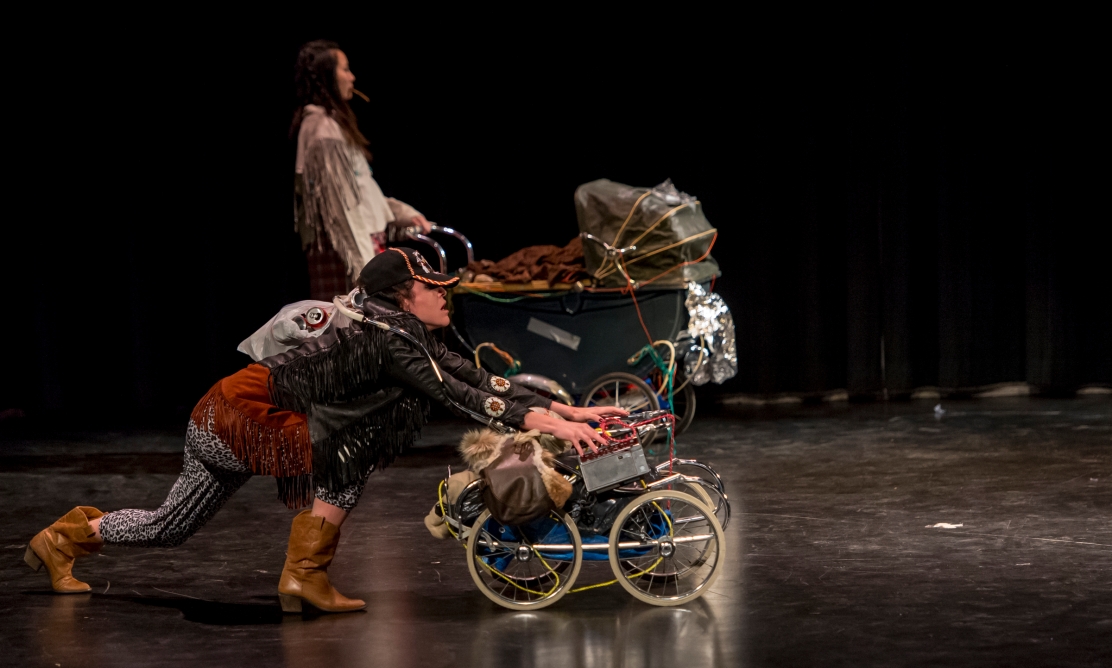 Expanse Festival is that March festival I’ve known about for a few years, but have always been too intimidated by the idea of going to a “movement festival” to check it out. But that’s changing this year! With Nancy McAlear’s physical theatre piece, The Contract, providing a bridge between theatre and dance, I’ve decided this is the year I check out Expanse. To get prepped for the festival, which runs March 11 – 15, I chatted with Festival Producer, Murray Utas.

“We have got some solid Canadian dance coming to this festival. We always have a strong local contingent, that’s something we as a festival will not give up.” And while local performers are a big part of the festival, artists from across the country will also be coming in for this year’s Expanse Festival. Murray says, “You’re going to get a couple Montreal flavours coming at you, you’re going to get a Vancouver flavour coming at you, you’re going to get a Manitoba flavour coming at you. There’s a couple artists who are from Alberta originally, but basically you’re going to get a taste of what the country’s dance community is talking about, what everyone’s making happen: where are we the same and where are we different… I think for our Edmonton audiences it’ll be wonderful. They can go to this one place and get a flavour of where we’re at what’s going on in other places.”

Starting off 11 years ago as a festival for dance in small spaces (specifically, Azimuth Theatre’s former venue, the Livingroom Playhouse), Expanse has grown larger and larger, moving from the Livingroom Playhouse, to Catalyst Theatre, to the Roxy Theatre, and now finally to the ATB Arts Barns. Murray says being at the ATB Arts Barns has given the festival’s organizers room to let their imaginations loose on what the festival could become. “Once we got into the Westbury and the space that there is for dance, it was a little overwhelming at first… There were a lot more rooms we could utilise, so it was like, ‘What does it grow into now?’ I’ve been lucky enough to have the same team now for seven years, it’s been fantastic… I’m so excited for all the ancillary pieces we’ve got going on, all the outreach events, and the lobbyists are back!”

Being in the ATB Arts Barns also gave the Expanse team the ability to invite in artists to make use of the additional spaces the building offers. “When I look at the Arts Barns with all of the rooms that are in there, it’s like, how do I activate all of these rooms, including the lobby, to be performance venues? To make sure there’s opportunity to bring work into it for dance companies who may not have a home? How can I use that for accessibility? That’s the idea behind the cabarets. It’s free for the audience to come in, but we’re loading it with performances that are going to happen just for that night. I can see it becoming something where you put on some ancillary events and just keep adding more performances to what it is you have going on in your festival and I think that can be a bandage for now in the wake of not having venues available to us, especially from an accessibility point of view for independent artists.”

That ancillary programming Murray is talking about includes The Lobbyists (no, not the political kind) who will be performing in – you guessed it – the lobby in between mainstage performances. This year The Lobbyists (programmed by Amber Borotsik) include: Gabby Bernard, Zoe Glassman, Lianna Makuch, Oscar Derx, Bill Yong, Nina Haggerty Centre for the Arts and The Dance Exchange.

The festival’s mainstage programming is:

Murray finishes off our tour of the festival schedule by saying, “I’m humbled by how high of level of artists we have coming to our festival this year.”

Supplementing the performance will be four workshops, taught by the artists visiting from other parts of the country. While all workshops are taught by dance professionals, Murray says participants themselves don’t need to be at a professional level and stresses that any of the festival staff will be able to advise which workshops are best for your interest and level of movement experience.

My final question is for some words of advice for those who will be seeing the festival – or maybe even a dance performance – for the first time. He says, “Make sure that you come open and unafraid to explore what is going to be presented to you. Some people get cautious and worried because they don’t know. But you don’t need to be that way, you just need to come and take part and you will surprise yourself in how much it will make sense to you or how much it will evoke you or give you joy. Don’t be worried you might not get it, because it’s not about that.”

Expanse Festival runs March 11 – 15 at the ATB Arts Barns. Schedule and artist information is on Expanse’s website, and tickets are $16.50 (plus GST) through Fringe Theatre Adventures.

PS –  The I Don’t Get It Dance podcast, hosted by Fawnda Mithrush and Paul Blinov, will be camped out in the lobby during Expanse, commenting on the shows they see as well as talking to audience members about their thoughts on the performances. Check out the Expanse Festival episodes from the podcast’s first season to get a taste of what you can expect.