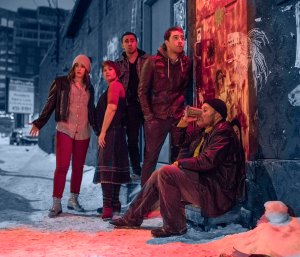 It’s an exciting year for Thou Art Here Theatre, Edmonton’s site-sympathetic company which produces and adapts Shakespeare’s works. A few months ago, the company found themselves with their first season on their hands – one which Co-Artistic Director Andrew Ritchie admits is, “in many ways, a happy accident… We were pursuing doing Kill Shakespeare and we were working on this adaptation of The Falstaff Project and Rutherford House contacted us about doing Much Ado About Nothing again and suddenly we found ourselves preparing three shows.”

The first show of the company’s season, The Falstaff Project happens at The Artery, March 9 – 15. An adaptation of Shakespeare’s Henry IV Part 1, the roving theatre performance follows Sir John Falstaff (played by Troy O’Donnell) and his relationship with Prince Hal (Neil Kuefler), the future King Henry V, as the two noblemen joke, drink and thieve in a tavern with commoners. Andrew says the idea for The Falstaff Project was sparked during a previous Thou Art Here Theatre production, Shake the Bar, which presented Shakespeare’s greatest drinking scenes in (where else?) a bar. “One of the scenes we did was a scene between Falstaff and Hal and I love that scene and that made me fall in love with the character Falstaff. I started investigating the quadrilogy of Shakespeare’s history plays and discovering the character and I wanted to try to do a production that focused on Falstaff.”

Specifically, it was the relationship between Falstaff and Prince Hal that Andrew wanted to focus on. “Falstaff is like a drunken thief and louse and doesn’t have many redeeming characteristics. Hal is stuck between Falstaff and the king, his father, but Falstaff is kind of a surrogate father in many ways. He is someone who lives in the moment and loves what he’s doing and lives for his friendships and what he enjoys in life. Hal learns from him and benefits so much from this relationship and in the end, in so many ways, abandons his friend. He moves on from him and the relationship ends in a really negative and ugly way, so I’ve been trying to focus on the character of Falstaff and how that friendship with Hal develops and the choices we make.”

As with the rest of Thou Art Here’s work, The Falstaff Project is site-sympathetic, which means the work is developed in collaboration with the space it is performed in. With The Artery closing at the end of March, The Falstaff Project will be one of the last performances in the space. “I think in many ways The Artery is the perfect bar [for this play]. I’m so grateful that we get to do it there, especially with the news of The Artery closing and we are one of the last shows that gets to be there… The Artery has so much spirit and soul in the little nooks and crannies, which totally speaks to the type of bar that I think this play needs to be in… The characters in the play live at the bar and I think The Artery has that same feeling of frivolity and joy and all these great experiences that have happened there. There’s an energy in the space and they work together.”

Andrew says developing the show for it to be played in The Artery’s space also played into the sound design for the show in that it uses work from local musicians. “It’s a cool new experience of collaboration and taking the energy of the space and putting that into the show.” Local musicians will also be taking to The Artery’s stage at 9:00 every night following The Falstaff Project (the ticket to the music performance is included with your ticket to the show, or you can buy a separate ticket for the just the bands). The line-up is:

The Falstaff Project plays at The Artery (9535 Jasper Avenue) March 9- 15. Tickets are $20 in advance for the performance + bands or $5 for only the bands from YEGLive.ca.

PS – check out the What It Is podcast’s episode 65 for an interview with The Falstaff Project‘s Ben Stevens, Neil Kuefler and Troy O’Donnell.