Simultaneously praised for her unique burlesque shows with Send in the Girls and winning Stirlings for her theatre for young audiences work, Ellen Chorley knows a lot about storytelling – regardless of the medium it’s through.

Ellen laughs, “Lots of people are like, ‘What are you doing? You do burlesque and you do children’s theatre? That’s so weird!’ Which I totally understand, they’re two extremes of the medium but there is a lot of crossover. First of all, I consider myself a theatre artist who is in charge of telling stories, so stories can come in lots of different mediums… Both mediums are about celebrating the relationship with their audience. It’s very important for children’s theatre to engage the audience and have a really great relationship with them so kids stay interested. And burlesque is built on the idea of connection with the audience to make it what it is. It’s not about doing a dance with a fourth wall of the theatre up, it’s about looking at the audience members and teasing and tantalizing them… [Both burlesque and children’s theatre] have a clown-esque aspect – we know the audience is there and we want to play with them.” 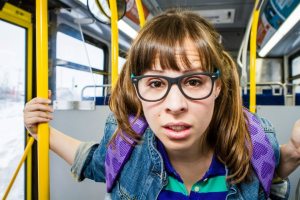 Ellen and Promise Productions‘ latest children’s theatre show, Birdie on the Wrong Bus, goes up January 20 – 24 at C103 and follows Louise Reiner, who everyone calls Birdie, as she accidentally takes the wrong bus home. The show celebrates the joy of not everything going according to plan and addresses the panic of feeling lost, while taking Birdie – and audiences – on a tour through Edmonton highlighting landmarks both familiar and off-the-beaten path.

Ellen says, “I wanted to find a lot of sort of secret places. We talk about the End of the World, the Alexander Circle and a lot of the places are actually my favourite places in Edmonton or places that had significance to me growing up. There’s a lot of things in Birdie where she gives facts about herself that are just facts about me that I didn’t even bother changing, I wanted to keep them the same. Because the show is about my experience growing up in Edmonton as well.”

While Birdie on the Wrong Bus was part of Promise Productions’ 2012 Snow Globe Festival of Children’s Theatre, Ellen found audiences were more likely to see other shows at the festival that were familiar to them. One of Ellen’s guiding ideas about children’s theatre is that the more that they relate to what’s on stage, the more powerful and memorable the experience is for them.  “I think it’s really important for kids to see theatre because it helps them practice empathy, but I think it’s also really important for kids to see stories or engage them in stories that are really relevant to them. I think this [show] is a great example of that because all the places that Birdie goes to are places that kids in Edmonton can go to too or maybe didn’t even know that they could go to… I think it is really cool that kids can go to the show and then say, ‘Hey, you know I never have seen the bat on 118 Avenue, why don’t we check it out? Or why don’t we go to Emily Murphy Park? Why don’t we go to find these places that are in town but we’ve never actually experienced?’ ”

The team that’s putting on Birdie on the Wrong Bus is very familiar to Edmonton’s theatre audiences outside of children’s theatre as well: Andrew Ritchie (director), Mari Chartier (Birdie), Lana Michelle Hughes (various characters), Benjamin Stevens (various characters), Beth Dart (stage management and lighting design), and Jaclyn Williams (set design). Ellen also pulls triple duty as producer, writer, and costume designer. Of the cast, Ellen says, “Mari and Lana are my best friends and I wanted to work on the show with both of them at the same time. Mari and I can be quite similar and I really wanted Mari’s voice for Birdie… Ben and Lana are both excellent character actors and they play 14 characters between them so I really wanted actors that could jump into character and change characters really fast and Ben and Lana are both really excellent at it.”

Promise Productions is also combining the run of Birdie on the Wrong Bus with a fundraiser. On Friday, January 23 Promise Productions is hosting the fundraiser Back of the Bus: An Adult Fundraiser for Children’s Theatre. Ellen says, “It’s sort of for the people who want to support Promise Productions but maybe don’t want to come buy a ticket. Maybe they think, ‘Oh I don’t want to see children’s theatre, it’s not going to be my thing.’ Or, ‘I don’t think I’ll enjoy it.’ Or, ‘I don’t feel comfortable going to see a children’s play without a kid with me. I don’t want to sit by myself as an adult.’ This is their chance to party with us and help support us and help us do what we do and produce indie children’s theatre… We have Mikey Maybe who is a rapper in town and he’s written all these raps for kids he’s going to perform. We have a band, Success 5000 who will perform some of their songs which are not really for kids but there’s something whimsical about them… There will be some children’s theatre-inspired burlesque and we will have a whole bunch of readings and scenes and songs and performances about kids or inspired by scenes from my old plays that have been revamped for an adult audience. I think it’s going to be a fun night…. It’s all the jokes we make backstage that we would never say in front of kids. And now we’re going to say them.”

Back of the Bus: An Adult Fundraiser for Children’s Theatre is one night only – January 23 at C103. Tickets are $16.75 from Tix on the Square. You can also buy a combined ticket to Birdie on the Wrong Bus and Back of the Bus for $30.