Isn’t it the coolest feeling when you meet a complete stranger and after a few minutes of talking, you realize that you know someone in common? It’s so true that it’s a small world, but it seems the novelty of finding that person connecting you to a complete stranger never wears off. But what if you haven’t actually found that connection, and instead that complete stranger is trying to scam you? Do you still wonder at the fact that the stranger’s lie was believable and how connected we all are, or do you feel duped and disgusted? That’s the premise of Walterdale’s latest show, Six Degrees of Separation, playing until December 13.

If you’ve heard of the play, seen the screen adaptation of it, heard of the real-life con-man the show is based on, or read my preview, you know the basic idea: an injured young man shows up on the doorstep of Flan and Ouisa Kittredge – an art dealer and his wife who live a life based around anecdotes and showmanship. Since the young man, Paul, seems to know their children they take him in, clean him up, and become enthralled with him. At least until they find Paul in bed with another man after he’s accepted $50 from the Kittredge’s. They kick him out and proceed to tell a couple friends of theirs, who it turns out have also been scammed! Over the course of the play, we see Paul move from victim to victim with his irresistible charisma and skillfully woven stories and we also take an emotional voyage through Ouisa, whose interaction with Paul is a catalyst to her search for meaning in her day-to-day life.

Having read reviews of other productions of Six Degrees of Separation, I know others have taken issue with John Guare’s script itself. I share those critiques, but they don’t overshadow the good parts of this production. It’s true that the play’s vignettes are a little all over the place and there are other ways to let the plot and characters follow the same development arc in a more succinct way. It’s also true that Ouisa Kittredge leads the audience’s emotional journey, but for the most part we just see her melodramatic musings and showing how those musings translate to her real life in a less subtle way might establish her character’s transformation more. But, the bones of the script are good, the story is engaging, and Walterdale’s big cast and technical crew have put together a solid performance.

There are a lot of my Walterdale favourites involved in this production – the bubbling energy of Mary-Ellen Perley and Darrell Portz as the Kittredge’s frenemies was hilarious. The way that the younger members of the cast (Samara Von Rad, Frank Keller, Macalan Boniec-Jedras and Julian Stamer) act as the too-privileged, sulking-but-yearning-for-real-parental-connection children is a great interpretation of their roles that goes beyond the lines of dialogue in the play.

As Paul, Othello Kieto is one of the smoothest-talking, charismatic actors I’ve seen on stage in a long time. Going into the play, I knew what sort of a character Paul was and that he would be very charismatic, but I had this idea that I wouldn’t be taken in by Othello and instead would focus on the other character’s reactions to Paul. Othello made that difficult to do – he was so engaging (even hypnotizing) and when he was impersonating Sidney Poitier or Flan or anyone else he drew on to help make Paul’s case, he was wholly transformed into that person. 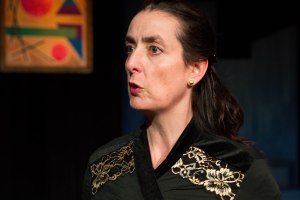 And of course the actors playing Flan and Ouisa – J. Nelson Niwa and Nicolle Lemay – were great, especially in the first few minutes of the play. I was uncomfortable at first, thinking that their acting was too obvious, but then I realized that it was on purpose to emphasize how their characters are “portentously” acting their way through their lives. This near over-acting works so well as a way of establishing the lives the characters lead and allowing us to see immediately that it’s working well enough for them, but without being caught up in their bubble, it seems ridiculous. Nelson and Nicolle did an admirable job of taking this over-the-top acting almost, but not quite, to the point of absurdity.

Although I expected no less, I thought the technical crew supported the themes of Six Degrees of Separation brilliantly. Joan Heys Hawkins’ and Rita Jensen’s set design and painting was incredibly detailed – imagine a canvas that starts where the wall meets the (stage) ceiling and ends at the audience’s feet. Now imagine this canvas has been painted in a mixture of different shades of blue paint dripping from the top all the way down the canvass. I didn’t take art history, but I’m certain the style of the set painting is a reference to a work of art (maybe someone can enlighten or correct me in the comments?). In a show in which one of the central characters is an art dealer (and a failed or former artist), the set was  a great on-theme backdrop. However, I did find the overwhelming monochromatic blue a bit visually and emotionally overwhelming. Thematically, the monochromatic blue worked perfectly to connect to Ouisa’s growing obsession with colour and the reference to Paul, and his borrowed bright pink shirt, as the spot of colour in their otherwise monochromatic lives. As an observer though, the effect of the colour on my emotional state came across a bit too strong for me and I found it difficult to withdraw from that blue/gloomy haze and find the moments of vivacity in the play, even when Paul was on stage.

Another interesting thing that Joan and Rita did was to even paint the moat (that black path you usually walk on to get to your seat at Walterdale). When I first walked in to the playing space I felt really rude, walking across their detailed painting. And I didn’t really get why they had done that until the characters first asides and direct addresses, in which the light, the set, the script, and the acting all clicked together. Richard Hatfield’s lighting design was a bit different than what I typically expect of him, which is these gorgeous, long, subtle transitions. Instead, when the characters had asides or moments of direct address, brighter lights came up where the moat would typically be in a Walterdale performance and the characters stepped so they were 6 inches from the front row and delivered their lines. Although it was a play about connections and making meaning, it was a big reality check when all of the sudden you’re not secluded in the dark anymore – you’re with these real people and they’re making eye contact with you and asking you questions. It was certainly an experience we don’t have that often as audience members and it really drove home that theme of connection that Six Degrees of Separation illuminates.

Six Degrees of Separation plays at Walterdale Theatre until December 13. Tickets are $12 – $18 from Tix on the Square.