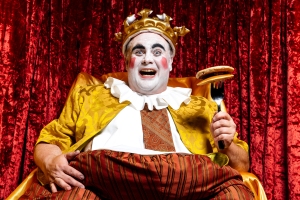 It seems like the perfect time for Edmonton Actors Theatre to re-mount Fatboy. The height of the Alberta PC spending scandal isn’t too far from our memories, everyone is checking the news daily for the latest gossip about Rob or Doug Ford, and let’s not even get started on how the Harper government feels at liberty to do what it likes with our rights. Earlier this week I even read a review of the production Ubu Mayor, which is based on – you guessed it – Rob and Doug Ford. With constant reminders about abuse of power by our elected officials, Edmonton Actor’s Theatre’s production of Fatboy is a timely, poignant and pointed view into a world that, some days, doesn’t seem to far from our own.

A little history about Fatboy itself: written by John Clancy after 9-11, the play is inspired by the 1896 French play Ubu Roi, which unintentionally ended up having it’s opening and closing on the same night because of the audience’s riotous response to the play. Both plays are based on a “king” who is the very personification of greed, gluttony and abuse of power.

In Fatboy, Clancy created a title character who is obsessed with money, power and, of course, food. The play has absurdist, existentialist and postmodern elements that combine to make a dystopian universe where Fatboy is king and he’ll bring on the end of the world with his nonstop killing, robbing, and eating.

The cast (Frederick Zbryski, Melissa Thingelstad, Mathew Hulshof, Tim Cooper, and Ian Leung) is a talented bunch who wholeheartedly embody their characters’ extreme and at times disjointed beliefs and desires and have great chemistry with each other. From the moment the curtain lifts, we are totally engaged and horrified by what they are showing us on stage. The actors’ ability to totally draw in the audience is made even more impressive by Clancy’s use of the “play within a play” format, where Fatboy (Frederick Zbryski) and Fudgie (Melissa Thingelstad) entertain us in front of the curtain (while scene changes go on backstage) – still in character, but commenting on the last scene we saw. Clancy also draws our attention to the fact that we’re watching a play through lines about what the actors are doing off stage and being double cast and needing to do a quick costume change. These techniques intentionally take the audience out of the world of the play and make it even more important (and challenging) that we completely buy into these characters.

I also really enjoyed the lighting and sound design (Scott Peters) which really overtly demonstrated the way the play  manipulates the audience. Playing what I can only describe as “sad string music” or “falling in love music” (I know you know what I mean) at key moments throughout the play made me feel unnaturally (and undesirably) sympathetic or warm feelings towards the characters.

I have to say though, I was a little surprised by the audience’s reaction on opening night. Opening nights are typically great audiences – they get it and they react just as they should – laughing loudly in the right places and being deadly silent in the most serious of scenes. Based on reviews of previous productions I went to the show expecting there would be more laughter than there was, and I think it’s because this play and its themes hit a little too close to home with today’s audiences.

In the time between now and when the play was written, a lot has changed. We are hyper-aware of the effects consumerism is having: discussions around global warming have changed from prevention to acceptance and adaptation. The localism movements are in full force and affecting how we consume everything from food to clothing to media. Environmentalism has moved from being a fringe idea to a mainstream way of life for many people and corporations. Attacks on the “American dream” have come not just from outside America in the form of the 9-11 attacks, but from within America through the global financial crisis and its wide-reaching and long-lasting effects. All of this is to say that we are living with the effects of greed, gluttony, and boundless consumerism and it’s very real. So, maybe the absurd and extreme statements this play makes are a little less funny and a have a little more sting. Maybe this play has morphed in the time since it was written from absurdist to realist and that’s why the humour didn’t seem to be as hard-hitting as I anticipated. That’s okay though, because even though it may have lost some of the knee-slapping reactions from its initial runs, it’s making us think more about the effects of our actions — as art should.

Fatboy runs at the Roxy Theatre until September 28. Get your tickets for $22 from Tix on the Square.

PS – for an interview with director Dave Horak and Frederick Zbryski and Melissa Thingelstad, check out the What it is Podcast’s episode 53.