An interview with Jake Hastey. 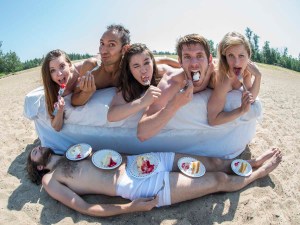 Step inside a reality inspired by Salvador Dali’s “Invisible Figures”, as six multifaceted performers explore the concept of desire in a comedic physical theatre show. Red Wine, French Toast, and The Best Sex You’ve Ever Had is about the moments in life when we are forced to make impossible decisions, the desire to have it all, but the knowledge that everything comes at a cost. With raucous laughs and gentle tears Toy Guns has charmed audiences all over Western Canada with this unique production. There is cake, and booze, Canadian naked (that’s when you keep your underwear on but make sexy eyes like you took off all your clothes) and a musical fart scene so it’s basically got it all!

What in particular about Dali’s Invisible Figures inspired Red Wine, French Toast and the Best Sex You’ve Ever Had?

I think everyone wants to have sex on a beach but then they hear the horror stories… and from across a gallery it brought back all those desires. We dragged a bed out to Elk Island Park to take promo pictures and were forced to dance with terrible sunburns for days, which was not sexy at all! The real moment for me with Invisible Figures was the stunning image and seeing the imprint of the people that weren’t there. I have had so many moments in my life when I have seen or experienced something astounding but felt there was something or someone missing. Most of the pieces I create start from a feeling and then grow from there.

Toy Gun Theatre is a relatively new theatre company, so tell us a bit about the company, your mandate and how this show fits in with that mandate.

It’s true if arts companies had a “new company smell” ours would still be pungent. But we have had a very good year! To be honest I’ve been working on this show for almost 2 years collecting music, images, relationships and moments that I wanted to explore so the piece definitely predates the company. Of course without the company it would still only live in my head and about 6 notebooks. This version is actually a stepping stone to what I believe will be a larger production at some point in the future that will feature an incredibly overweight Mermaid with a drinking problem serenading the audience while propped up on car jacks.

The show has received amazing reviews, huge audience response, and is currently selling out its run at the Calgary Fringe Festival.

I’m incredibly thankful to Christine Lesiak, and Amber Bissonnette who ended up sharing a role in the show (Amber performing in Winnipeg and Edmonton, Christine in Calgary). As well Mike Kennard (Mump and Smoot) allowed us to use his giant white sack in the show, which was a life saver!

The 33rd Edmonton International Fringe is August 14 – 24. Get your tickets attickets.fringetheatre.ca