An interview with Mena Jewell. 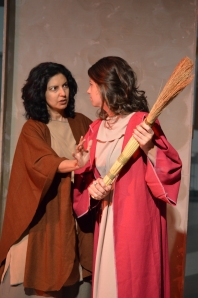 A family-friendly drama at the Fringe which tells the lesser-known but ancient (710 BC) story of two Jewish families.   This story, found with the Dead Sea Scrolls, has been adapted for the stage.  It’s enjoyable for all ages.  JewishEncyclopedia.com calls it “among the most delightful of short stories.”

You compare Tobit to Fiddler on the Roof. What are the similarities between the two shows?

Tobit is about the relationships between generations, and the desire for the elder generation to preserve the faith and the culture, which includes encouraging the next generation to marry ‘within the tribe’ so to speak.  Tobit isn’t a musical, though there are a few songs.  This story is told largely from the perspective of Tobit, the Jewish patriarch, but it’s a story with many characters (a cast of 12) who are also very interesting.

Tell us a bit about the process of writing/adapting Tobit and how you have seen the show grow as the director.

To be honest, I initially thought that I could just tweak the original and present it as-is.  The more I looked at it, the more I realized that it needed to be ‘translated’  to make it more accessible to the modern audience.  The revisions began, and they were fairly intense.  I had several people examine the script, and it became richer and more complex in response to their comments and questions.   The more I worked on Tobit, the more I saw how relevant it was to today’s world.
Being ‘inside’ this story has never become dull for me, because the more time I spend with it, the more I come to see the layers of meaning in this timeless classic.

Yes, the show has grown since we started rehearsals in May.  I love realism and in my opinion, the actors have truly internalized the people of Tobit and made it their own.

This show has really become international for me.  I’ve had a hoot collecting specific props and they have arrived from all over the world.  Our broom for example, comes from the Ukraine; one of the knives is from Bulgaria, and the doorway strung with bamboo beads is actually from Vietnam.  That fits right in, especially now that Bob Locicero built a Persian-style door frame.  (That man whipped up a set of stairs for me this week in 5 minutes, no exaggeration — but I digress . . .)

In addition, I’ve had the help of both local and international freelancers on some of the sub-projects associated with the play; I’ve dealt with wonderful people working in countries such as Serbia, Brazil, Great Britain, Bangladesh, Croatia, Hungary.

The larger Edmonton community has assisted hugely with this production.  We’ve got a ‘cast’ of sponsors who really supported the play and allowed us to make the play as musically and visually beautiful as we can for our audiences.   It’s a great story, and deserves to be told well.

The 33rd Edmonton International Fringe is August 14 – 24. Get your tickets at tickets.fringetheatre.ca.