An interview with Chris of Peter n’ Chris 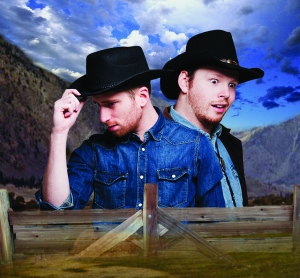 Canadian Comedy Award winning duo Peter n’ Chris take on the Wild West. It’s a fast-paced, physical comedy set on Peter’s farm.  A rich Oil Tycoon comes in and steals Peter’s land, and it’s up to Peter and his new dirty drifter friend Chris to save Peter’s farm and Cow.

Westerns are such a fun genre to see on stage, but I find I don’t see a lot of them (at least in Edmonton). What inspired you to do a western show?

I’m glad you havent seen many yet! It seems like this year there is an over-abundance of Western themed comedies on the fringe.  I think there is something in the air right now, and everyone wants to do a western.  We picked ours because we like to work within genre (i.e. our other play Peter n Chris and the Mystery of the Murder Motel– also running in Edmonton- which is a send up of the horror, slasher and mystery genre).  We just started joking around with the idea and writing a rough outline and it just started coming together. It’s just like you said, Westerns are super fun – so it seemed worth pursuing and polishing

Kinda OK Corral is a great name for a show – how did you come up with that name (or if it’s the name of the ranch – same question: where did it come from?)

Well, the play is inspired from the movie GunFight at the OK Corral and pays homage to duo cowboys like Doc Holliday and Wyatt Earp as well as Butch Cassidy and the Sundance Kid.  So we borrowed some of the title from Gunfight at the OK Corral and then just thought it would be funny to make Peter’s Corral a little bit worse.  He’s only got a kinda Ok Corral…It’s a pretty good corral, but not a great one.

It’s a goofy fun hour of comedy – if you liked any of our comedies in the past, you’ll love this one. It’s fresh and we are still having lots of fun performing it.  Come see a great horse chase and a great mime bar fight

Nope! but we help write The Irrelevant Show – which has some great Edmonton folk in it like Mark Meer, Donovan Workhun, Peter Brown, Niel Grahn etc.

The 33rd Edmonton International Fringe is August 14 – 24. I’ll be previewing shows up until the Fringe starts. Want your show to appear on After the House Lights? Email jennamarynowski@gmail.com.