An interview with Mike Delamont. 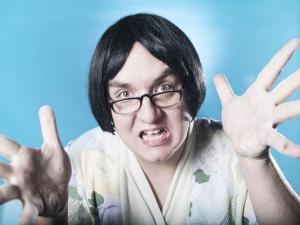 EVEN BETTER THAN THE ORIGINAL

God, dressed in familiar floral power suit, returns to skewer everything from circumcision to the mormons in an unforgettable and ALL NEW hour of Comedy. You won’t need to have seen the first one to love part two!

Audiences obviously loved God is a Scottish Drag Queen. What do you hope to accomplish in this sequel to the original show?

I hope that people have a really good time at the sequel. It lets people spend a little more time with a popular character and maybe have some of their own questions answered. It’s a fun show and hopefully will provide them with an hour of laughter. The show has been playing to sold out houses so far and audiences are saying like it even better than the original, so hopefully Edmonton will agree!

I have a very good grasp on what happens in the show when I’m on stage but my goal is that the audience has no idea. It’s working for me if the audience can’t tell if I have said a joke 50 times of if I have just come up with it on the spot. I think it adds a freshness to the show and there are many new and improvised moments at ever performance which I think makes it special. I like that an audience will see something that no other one will see. It’s nice to share that with somebody

I want the audience to know that it’s a new show! It had its world premiere in May, so its just a baby! Its a really fun show and I think its better than the last. Edmonton audiences have been endlessly supportive of me and my work, and I couldn’t be happier to be going back!

I don’t know if anybody on the show staff is very well known in Edmonton. As for proper Edmontonians, Mr Murray Utas has been very helpful in bringing me to Edmonton again and again and so has the wonderful Beth Dart and all of the wonderful people at Edmonton’s late night cabaret!

The 33rd Edmonton International Fringe is August 14 – 24. Get your tickets at tickets.fringetheatre.ca.