An interview with Hiroshi Koshiyama of Fubuki Daiko 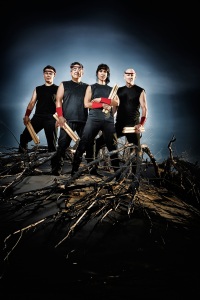 Tell us a bit more about the name of your show Godzilla vs. Led Zeppelin. Why did you choose that name?
The title aptly describes our approach to Japanese taiko. Our Western musical influences (Led Zeppelin, Benny Goodman, rap) collide with our deep respect for the traditional Japanese relationship between the drummer and the drum. Sometimes Godzilla prevails, sometimes Led Zeppelin. Sometimes the two forces balance each other out. While we believe what we do is a spiritual practice, we never take ourselves too seriously.

This is your first year at the Edmonton Fringe Festival – what made you want to be part of the festival?
We enjoyed performing the show at the Winnipeg Fringe Festival and wanted to do it again with some slight tweaking. We thought that Edmonton Fringe audiences, who are already familiar with taiko via the local group Kita no Taiko, as well as professional Edmonton taiko duo Booming Tree, would be interested in seeing a different take on the art form.

Anything else you want audiences to know about the show?
It appeals to a wide demographic in terms of both age and interests. The performers engage with the audience in between pieces which themselves are extremely varied both musically and choreographically. In other words, it’s not all just banging on drums.

Bonus question: Any names you want to drop who have been involved in your show (Edmonton arts people or otherwise)?
Greg Shimizu from Booming Tree.

The 33rd Edmonton International Fringe is August 14 – 24. I’ll be previewing shows up until the Fringe starts. Want your show to appear on After the House Lights? Email jennamarynowski@gmail.com.