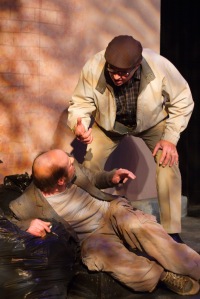 Starless chronicles a day in the life of Ralph, a homeless man living with the love of his life in gazebo park, Edmonton. Written by Eric Rice and developed as part of Walterdale Playhouse’s From Cradle to Stage program, Starless is playing at Walterdale Playhouse until May 17.

Starless is a play that aims to make us think about how we, ourselves, and the policies and institutions we create interact with those who are marginalized. As Ralph, the main character,  Mark Anderako uses his considerable physical theatre skills to create a character whose gestures, ticks, voice  and most of what he says work together to scream crazy. While it takes a while to get there, we eventually learn that the “cages” Ralph keeps mumbling about are the belief systems, institutions, and thoughts that most people take for granted – so much so that we don’t even recognize them as cages. In his moments of stillness and clarity, we’re left wondering if we’ve misjudged Ralph. Maybe he is, after all, a “sane man in a crazy world” and maybe he’s right – maybe society doesn’t need all these structures we’ve built and force ourselves into.

The way Ralph interacts with the supporting characters continue to call into question the societal structures we take for granted – the landlord that tells him to find a job, the police officer that moves him out of the way before the crowds come to the market (both played by Dave Wolkowski), the vendor that wants to give him money or food to ease his guilt, the priest who wants to give him religion (both played by Jim Zalcik), the reporter (Stephanie O’Neill) who feels it’s Ralph’s duty to tell his story to inform the public. Even the love of his life, Mary (Monica Maddaford), who wants to put a roof over both their heads… Everyone in his life is pulling Ralph in different directions, dictating to him what he should do. The only person who accepts him as he is and protects his right to be that way is Paul (Carter Hockley), a young, somewhat still moldable, boy. As a playwright Eric Rice recognizes that most of us see these interactions, which happen on our streets everyday, in an environment where we’re distracted by our music, other pedestrians, traffic signals, or sidewalk rage. While everyone may have an idea about these types of interactions happening, by watching them being acted out meters in front of us with no distractions, we are given the opportunity to examine our ideas and assumptions around marginalized people and our social institutions.

While all of the actors did a great job with developing their characters as living, breathing beings, I felt there could have been more emotion injected into the show. Some parts of the production seemed to be performed by rote, and other parts definitely have potential for the humour to shine through. I’d love to see another production of Starless in a few years to see how the script grows and develops as it is exposed to more actors, audiences, and production teams. 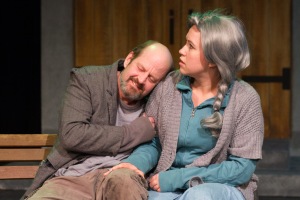 On the production side of the show, I appreciated the set’s simple yet effective design (by Alan Westen) – converting from a park to a coffee shop to a church to a back alley without being disjointed. I wasn’t as much of a fan of Brad Melrose’s lighting design on Starless as I have been of his other works. The speed with which the lights went down and came up stopped me from being immersed in the production as I’m used to a more gradual fade in and fade out of the lights. I also wondered about Aldon Brewer’s sound design, as the play felt a little quiet for taking place on the streets of Edmonton. I could have used a bit more ambient noise – traffic, birds, muted conversations to more fully immerse myself in the world Ralph and Mary live in.

Starless is presented as Walterdale Playhouse’s From Cradle to Stage production and runs May 12 – 17 at 8:00 pm. Tickets are $12 – $18 and can be bought at Tix on the Square or at the door (cash only).