I’ve been following the development of the play Escape Velocity, created by Undercurrent Theatre, since January and am excited that the show and associated performing arts festival are almost here!

Undercurrent Theatre is an artist-activist ensemble that emerged following the creation of the piece (un)earthed last year. Undercurrent Theatre was formed as a way of continuing to explore the themes around the experience and perception of gender-based violence across different cultures, and that is precisely what their new work, Escape Velocity is all about. Escape Velocity explores gender-based violence in a number of different forms and contexts through snippets of stories told through both traditional theatre and movement theatre.

My first exposure to the project was participating in a workshop ran by Undercurrent Theatre in January, which explored themes of gender-based violence and racialized stereotypes of violence in light of the conversations that the members of Undercurrent Theatre had been having for several months. Following the workshop, Director and Facilitator Nikki Shaffeeullah and I sat down to chat about what the group was hoping to get out of the workshop, what they learned at the workshop, and how they would be proceeding going forward. If you’re interested, you can check out the interview on After the House Lights. 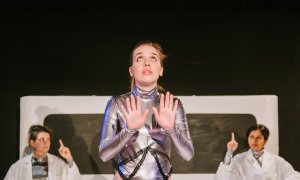 Earlier this month, Undercurrent Theatre had an open rehearsal and feedback session where they performed Escape Velocity for anyone who wanted to see it and then solicited feedback from the audience about the themes and the story telling techniques the performance used. Based on the preview I got of the performance that afternoon, I’m very excited to see the finished work! What I liked most about what I saw at the open rehearsal was that the performance doesn’t tell you what gender-based violence is, it just shows you situations and examples and leaves you to develop your own conclusion about them. The show also has a number of access points – whether you’re used to seeing dance, more traditional theatre, or even spoken word performances, the show uses a variety of storytelling methods so that the message is accessible to a wide audience.

Escape Velocity and Other Works runs at the Azimuth Theatre (11315 106 Avenue) April 2 – 6. For a full festival schedule visit Undercurrent Theatre’s website. Admission is pay-what-you-can at the door.

PS – for more on Escape Velocity and Other Works, check out Episode 40 of the What It Is Podcast where Taylor Chadwick interviews Nikki Schaffeeulah and Aliya Jamal