“It’s about race, isn’t it?” Steve says, and the actors and audience go quiet. Well, yes – Clybourne Park, playing at the Citadel Theatre January 25 – February 16, is about race. And it’s about communities, gentrification, improving one’s own situation and a host of other social issues that pop up repeatedly time and time again, and yet we still haven’t figured them out.

Clybourne Park takes spans 50 years in a neighborhood near Chicago’s downtown core. The first act takes place as a white family is packing up their belongings and moving to a different neighborhood, having (unknowingly) sold their house to a black family. The community association is outraged – and has even offered to purchase the house from the new owners. Act two takes place in 2009 as a white family has purchased the same house and will be starting demolition on it on Monday, as long as regulations from the city don’t interfere with their plans to build a house that is dramatically different from the historical houses that the neighbourhood is known for. A couple who live in the neighbourhood try to educate the newcomers about the home’s historical value and why that is different and – to some people –  more important than its monetary value. The ensuing heated discussion is one that’s very relevant to Edmontonians as we tackle these very same issues in our own city, both in city council and in neighbourhoods throughout the city. 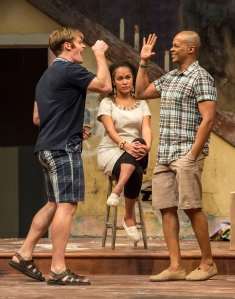 Knowing the play’s content, language choices, and the Citadel’s typical audiences, I have to say bravo to the Citadel for including Clybourne Park in it’s 2013/2014 season. Debuting in New York in 2010, Clybourne Park is a modern response to the 1959 play A Raisin in the Sun, which portrays a black Chicago family’s process of improving both their living and financial situation, in part by moving from a run-down part of Chicago to a traditionally white neighbourhood (this is the family referenced in the first act who has bought the house). Clybourne Park is certainly a more risque piece for the Citadel to take on. Having read the script before the show, I was interested to see if the Citadel would follow the script to the letter, especially in regards to some of the less savory language. As the lines approached closer and closer, my inner dialogue was, “Are they going to do it? Are they going to say it? Oh my goodness, yep, they just said the c-word.”

If you’ve been to the Citadel recently, you’ll know many of its patrons are of an older generation – and their reaction was really interesting to watch. On my left was a man who, as evidenced by his constant sighing, was clearly not enjoying the second half, where the issues the play addresses are made even more prominent. On the other hand, the ladies on my right were having a great time, but made sure that they were going along with the rest of the audience, either laughing or sitting in astonished silence. I also heard a few people complaining about how hard it was to make out the dialogue of the play. Well, yes, but that’s part of the genius of this play – it’s not a traditional play written in traditional times where everyone takes their time and lets others finish their sentences. It’s a play depicting people engaging in a conversation about things they are passionate and opinionated about, and that gets messy. As audience members, we have to accept that people talking over each other and us not being able to understand all the conversations happening on stage is part of what makes this play so real and relevant.

A final kudos goes to set designer Marissa Kochanski. The fact that the set must transition from 1959 in the first act to 2009 in the second act while telling the story of what happened in the neighbourhood in the intervening years makes the set design incredibly challenging. Marissa certainly rose to that challenge – when the curtains rose after the intermission, I could hardly believe that only 20 minutes had passed between the first and second acts.