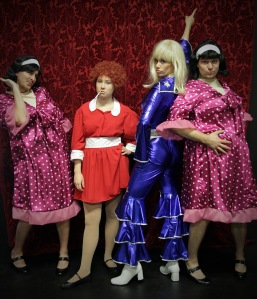 Forbidden Broadway’s Greatest Hits is already stirring up quite the scandal, according to Martin Galba, and it hasn’t even opened yet. “We tweeted and Facebooked that Liza Minnelli is performing during Forbidden Broadway with a little disclaimer that they needed to go to the web page to get more information, and Tix on the Square was getting numerous calls about the fact that Liza Minnelli is going to performing at La Cite!”

Forbidden Broadway is a show parodying musical theatre, which has been running in one form or another since 1982. Forbidden Broadway’s Greatest Hits spoofs over 40 of, you guessed it, the greatest shows Broadway has ever seen and is the first show of Two ONE-WAY Tickets to Broadway’s 8th season. Martin Galba, who pulls double duty as an actor in the show and the company’s Artistic Director, says the show has been a year in the making. “I myself started working on the show about a year ago because of the number of costumes and wigs it requires… [We’re also] presenting it in a very classy way, we’ve got a beautiful arch that the spotlights light up all over, there’s a red curtain, there’s a grand piano on stage that our musical director plays on… it’s a very classic, elegant look.”

While the show only has four actors, it will take audiences on a whirlwind tour of Broadway – a “Broadway 101” if you will. Over the course of the 90 minute show, the actors go through 90 costumes and 30 wigs, bringing to life scenes from shows such as Les Miserables, Annie, Wicked, The Phantom of the Opera and more. Martin says, “It’s a walk down the history of Broadway… It goes through the whole gamut of the last 20 – 30 years of Broadway… It really gives an overview of these 40 different shows in a snippet. We’re doing an amazing job of telling these stories in 2 – 3 minute snippets.”

Even though most of the shows spoofed in Forbidden Broadway’s Greatest Hits have been preformed by Two ONE-WAY Tickets to Broadway at some point, staging the show wasn’t easy. On top of all the costumes, wigs, and set pieces, the actors had to learn to not just spoof, but impersonate, a number of famous Broadway performers – everyone from Liza Minnelli to Barbra Streisand to John Travolta.  Martin says, “There was the added challenge of taking someone iconic like Barbara Streisand or Liza Minnelli and translate them and make them as real as we possibly can… We’ve spent a lot of time working on getting the right delivery, the right inflection in our voice, things like that… It’s really a show that required a lot of research.”

If you’re interested in catching Liza Minnelli, er… Kristin Johnston, Forbidden Broadway’s Greatest Hits runs November 8 – 16 at La Cite Francophone. Tickets can be bought from Tix on the Square and are $28.