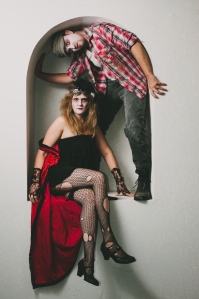 Catch the Keys’ annual Dead Centre of Town returns October 29 – 31 for it’s sixth year of spooking Edmontonians, even to the point of making a grown man faint! Over the years, Dead Centre of Town – a “roaming haunted house” – has haunted venues like The ARTery and New City Suburbs, and this year it will take place in the historic Block 1912. Megan Dart, the show’s writer, says, “Each year, we research and choose a building with historic significance. Block 1912 celebrated its 100th birthday just last year, and has a rich history in the Old Strathcona area. It’s located in the Hulbert Block, which in it’s early days was home to retail space on the main floor (we’ve heard rumour it was a general store), and professional offices on the upper floors. Of course, as the Old Strathcona area matured, the space was used in many different ways – it was a furniture show room at some point, private residences at another. Block 1912 has graciously allowed us access to the floor above the cafe – there’s such a history just in the artifacts forgotten upstairs. Old newspapers, furniture, clothing – it’s a bit of a time capsule really!”

And what’s this about grown men fainting? Megan Dart explains that this happened in Dead Centre of Town’s very first year, “The first year was magical. We had no idea what we were doing. We knew we wanted to tell the story of this magnificent building in a way that could send shivers down someone’s spine. Both Beth and I are huge horror fans – we devour books and movies and urban lore and we knew this was something we wanted to translate into a performance. The script the first year was very bare bones – we had the stories, and a few characters and not much else. But our team believed in it, and we pulled together a show that has set the bar – we buried someone alive behind a brick wall, we embalmed a living body, we made a grown man faint! Each year, we’ve tried to stay true to our roots – to keep the scare more psychological than showy, to let the imagination of the audience do the work.”

This year, Dead Centre of Town’s theme is a ghost museum, “a breathing, creeping, other-worldly menagerie full of shock and surprise.” according to Catch the Key’s media release. When I ask Megan what it’s like to write a play which is an immersive experience and takes the setting heavily into account, she says she starts with a deep-dive research process, immersing herself in the building’s history and the history of the time period when the building was built. “We have an incredibly interesting, and sometimes dark, history in Edmonton which makes my writing process really fun. And, of course, we have an amazingly collaborative cast – I give the company the arc of the performance, and they help me fill in the details. Oftentimes, the script we start with is not the script we perform. We bounce ideas back and forth until the show becomes it’s own living, breathing entity.”