It’s October, and what’s a more perfect play to see than Dracula?  Knowing the story of Dracula, I went to Walterdale expecting to be entertained, but not really to be scared. I was wrong. Walterdale Playhouse’s take on this classic story was both chilling and sexy.

At the intermission I overheard an audience member saying, “It’s either really brave or really daring to mount this play.” It’s easy to see why. The script, while remaining fairly faithful to the story, moves at an incredibly fast pace. To have condensed a 500 page novel into a two hour play is a feat in and of itself. However, the cast – who were more than able to keep up with the play’s unrelenting pace, while still using the language of the late 19th century – were equally as impressive. One thing that struck me about Dietz’ adaptation of Dracula is that no one character dominated the script, and in Walterdale’s production, this held true. Every actor in this play, from the vampire vixens to Dracula himself, were fantastic. In particular though, Andrew Mecready’s portrayal of Renfield (the play’s “madman”) brought one of the themes of the work to life for me, Although I know the story, the way Dracula plays with the concept of madness – what is sane can be mad, and what is mad can be reasonable – never really struck me. Andrew’s portrayal of Renfield shed a spotlight on that theme – the way he seamlessly flipped his “insanity” switch on and off – morphing from someone with high class manners to the maddest of mad men in the same sentence – made me re-examine how I see Dracula. 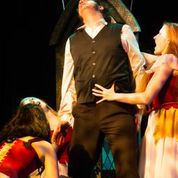 On the topic of themes, a lot of times the vampiric metaphor can lean strongly towards the suggestion of rape, but this production firmly managed to stay away from that theme. Those who fell under Dracula’s spell were active participants in the seduction, rather than victims. Local actress and musician Sarah Bryn Mallandaine, in the role of Lucy, was another standout actor for me. As the play carried on and Sarah portrayed Lucy’s transformation into a vampire, I became more and more enamoured with her. The way she integrated the sensual and dangerous aspects of our conception of vampires into her physical performance blew me away. For example, In a scene where she is discovered seducing Seward (Lewis Wood), the way she twisted and arched her back while screeching embodied what it is to be “undead” in a very physical way. 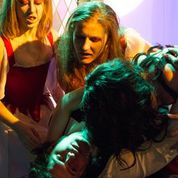 The make-up and special effects in this production were another aspect that I couldn’t stop admiring. Nelson Niwa (Van Helsing), who I spoke to for my preview of Dracula, really wasn’t joking when he said they had one of the best make-up artists in Western Canada working on the play. Prudence Olenik has done make-up for television series and films, and has even won a Gemini award for her work on the film 100 Days in the Jungle. When Steven Dhillon, who plays Dracula, came out in a flashback where Dracula was aged and decrepit I, and I think the rest of the audience, moved back in our seats. The make-up and hair he was wearing were so ghoulish and completely unexpected, I think we were all taken by surprise. The layout of Walterdale and how the audience sits so close to the stage certainly helped draw attention to Prudence’s work, giving us all an up close view of all of the vampire’s fanged teeth, straggly hair, and the bite marks inflicted on the living by the undead.

I could go on and on about how much I enjoyed Dracula, but really, you should just buy a ticket, and sit back and enjoy the acting, the lighting, the special effects, the make-up, the set, and everything else that makes this production truly a top-notch piece.

Dracula plays at Walterdale Theatre from October 16 – 26. Tickets are $12 – 18 and can be bought at Tix on the Square, or you can check out the full schedule on YEGLive.ca.