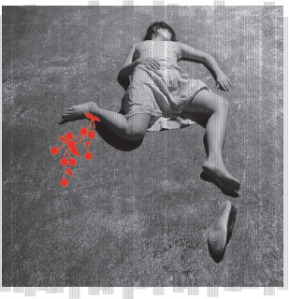 Just like the scene of a real accident, Northern Light Theatre’s An Accident, drew a large crowd at the PCL Theatre in the ATB Financial Arts Barns on opening night. The crowd was so large, in fact, that extra chairs had to be brought in to fit the entire audience. I was surprised that this show was the first I had seen at the Arts Barns with a full house, but Northern Light Theatre’s season closer sure deserved it.

With Melissa Thingelstad’s opening monologue, I quickly forgot about the full house and slipped away into the twisting, painful, and entirely absorbing performance of a woman (Libby) recovering from being paralyzed and left with memory loss after being hit by a car driven by a reserved history teacher, Anton. The play is not only about recovery, but about coming to terms with what has happened and the resolution that comes for both characters through Anton’s visits throughout Libby’s healing process. What stood out about An Accident for me, though, was how the play brought us – the distracted, on-the-go, “I’m so busy” audience members – back to the present moment. Theatre is the one place where I can forget about everything else I have to do and concentrate on everything that’s happening right now, in the theatre. Thingelstad’s character, Libby, was texting and walking when she was hit by Anton’s Toyota Corolla. Anton, played by Michael Peng, was absorbed in enjoying fresh cherries when he hit Libby. Yet, because of the accident, they’re forced to slow down, to get out of their own heads, to interact with each other and focus on the most essential part of being alive – our bodies, and all that they do.

As with the other Northern Light Theatre sets I’ve seen this year, the set for An Accident was incredibly well designed, with the audiences facing off against each other, divided by a hovering spinal cord which serves as a constant reminder of the weight hanging over both Libby and Anton’s heads throughout the play.

Melissa Thingelstad was brilliant in the role of Libby. Having seen her earlier this year in Theatre Yes’ production of The List, I initially couldn’t disconnect her from the role of the narrator in The List. However, as the play progressed, Melissa showed us how truly nuanced she is as an actor. Switching from angry to optimistic to vengeful to caring in a matter of minutes, Melissa led the audience through an emotional roller coaster ride, and at the end, I wasn’t sure if I was disgusted with or envious of her. Michael Peng as Anton was a perfect counterpart to Melissa, playing a character whose expression of remorse was so terribly uncomfortable for me – part of me wanted to say, “keep it together, man” while the other part questioned how I would react in that situation. Would I have the courage to walk into my victim’s hospital room saying, “I wanted you to know it was me. I did this to you.”? Michael’s constant movement, his every effort to “make it better” and especially his emotional outbursts of pain and rage and hope provided an excellent counterpart to Melissa’s alternately insidious and candid dialogue.

Melissa and Michael’s characters are why I walked out of the play thinking about the present moment and how so few of us are rarely in it. Melissa and Michael played their characters so well that they never became predictable. How many of us only half-listen to the people around us because we know – or think we know – what they mean or what their intentions are? How many of us are like Anton and actually enjoy the sweetness of things like fresh cherries, oblivious to what’s around us? Sometimes all it takes is An Accident to remind us to slow down and notice the little things in life.

An Accident closes Northern Light Theatre’s 37th season. The show runs May 17 – 25 at the PCL Studio in the ATB Financial Arts Barns. Tickets are $21-26.