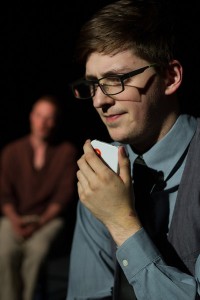 Every year Walterdale Playhouse presents new plays in its show From Cradle to Stage. This year, the two one-acts take a slightly dark twist – one exploring anxiety and mental illness, the other focuses on two characters seeking closure.

Exposure is the story of how three people’s lives intersect in a mental illness treatment centre. Director Eric Rice says he was excited to be given the opportunity to direct a new work. “As a new play, I approached it differently that one might approach a more established play. There’s no rigid way to look at it, there’s no one else who has directed it, there’s no history to it, there’s no historical period to it. It’s very loose. I really like that, especially with new actors and with me being a new director, it allows me to really play with it. There’s less pressure and more freedom because the actors can really develop the characters on their own.”

Exposure is one of a growing number of works that explore mental illness in all its forms. The three characters within the play were created by playwrights Stephen Allred, Bethany Hughes, and Jessie McPhee – who each took on one character’s voice in writing the script. Much different than the typical form of one playwright creating every character of the play.

I find the increased number of plays exploring mental illness to be an interesting phenomenon, but a good one. Eric says, “I think it’s becoming more and more acceptable to talk about mental illness and the public is understanding that it’s not a black and white scenario… I think it’s becoming more feasible and I think it’s becoming more nuanced. It used to be that crazy people were crazy people and it was quite extreme.” Exposure, on the other hand, doesn’t take those extreme positions, instead allowing the audience more opportunities to see aspects of themselves in the characters. Sarah Culkin, who plays Anna – a young mother in treatment for anxiety in order to regain custody of her daughter from social services – says, “I can look at my own life and find parallels. I have dealt with my own issues in the past – I’ve met my breaking points and gone beyond that. Being able to use that as creative fuel has been incredibly cathartic.”

As with many Edmontonians, the River Valley is one of my favourite spots. The Ugly Spot tells the story of what happens when two strangers meet each other at “their” spot and refuse to leave. Opening the program, I was shocked to see the play was only 25 minutes, however the two actors, Chance Heck and Cayley McConaghy, say the length works to the play’s advantage. Chance says, “I think people have little twenty minute interactions all the time with people they don’t know, and it was just making that come to life. But the emotion is in the words – these people who don’t know each other vying for this thing that’s really important.” Cayley adds, “Even though the play is quick and happens fast, it was so meaningful in this little pocket of time.”

One aspect of a performance that is most important to me as an audience member is the believability of the chemistry between the characters. John Trenthart says that he was fortunate to be able to see Chance and Cayley read together in the auditions. “It’s super rare to be able to get the two actors you want reading together in the same audition block, so I was just like, ‘it works!'” Even in the short preview I saw, the way Cayley and Chance show both the awkwardness and strange trust that comes from knowing you have nothing to lose when speaking to a stranger is what will make The Ugly Spot a very enjoyable 25 minutes of theatre.

From Cradle to Stage runs May 20 – 25 at Walterdale Playhouse. Tickets are $12 – 18. For playwrights aspiring to be part of next year’s production, there will be an APN workshop “The Nuts & Bolts of Playwriting” on May 26.