I walked out of Ride the Cyclone wanting to cry. Not because the musical made me cry, but because it didn’t. The promotional images feature a young woman who looks somewhere between death and life. The music that plays as I walk into the Maclab Theatre at The Citadel is creepy. The set is reminiscent of an old, abandoned fair – and it is creepy as hell. I read the playbill and it says it’s about “a teenage chamber choir from Uranium, Saskatchewan who died in a roller coaster accident at a traveling fair”. I think, “yes. This is going to be emotional, dark, and it’s going to make me feel something. We as an audience are going to experience something wonderful together.” And then we don’t. Or, I don’t. Because I’m confused.

Ride the Cyclone delivers on the script in a big way – the actors were fantastic, the sound design gave me shivers, the set (as I mentioned) was fantastic in its suggestiveness and flexibility, the band was talented, and the multimedia really demonstrated one of the big potentials I see for incorporating that medium into theatre.

But the script and story itself falls flat. Written by Jacob Richmond, the play walks the line between this really terrible event – six children dying at a carnival – and a celebration of life. The play is set against this gut-wrenching backdrop, but then barely acknowledges it. In all honesty, you know what the ending is within the first ten minutes. Really, you even know how that ending will unfold. As an audience member, I’m there for the journey the play will take me on.

If the story is truly about the actors celebrating “their individuality while coming to terms with their untimely demise” as the playbill says, then the story needs to pick a side. It needs to celebrate the beauty of life, or explore the fact that this terrible thing happened, not walk the middle line. I wondered: maybe that was the point. To show that life is predictable while simultaneously saying that it’s just a game. But that wasn’t it either – because we know life isn’t predictable, especially if you are from a small town that lived and died based on the abundance of natural resources.

After walking home thinking about the play, I actually stopped in the hallway of my apartment building, frantically dug around for the playbill and started searching to see if I had unintentionally left during the intermission. My heart pounding, I realized that the actors had bowed, and I had even stood up with the audience giving a standing ovation – the play was over. I was just waiting for the other shoe to drop, for the elephant in the room to be addressed, and it never was. 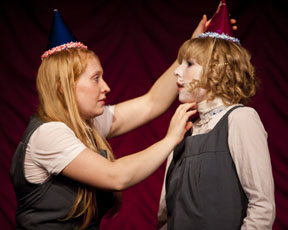 Ride the Cyclone has a lot of potential. I see it working as a terrifying story of unfulfilled life juxtaposed by beautiful, emotional songs. AND I see it working as a joyous celebration of the time that we DO have to live and making the most of it. But, it can’t be both. Like the characters in the story, this play is an adolescent on the verge of deciding what to be when it grows up.

So, why did it get a standing ovation?

Because the execution of the story, as it is, was fantastic. Both the music and the performance of the songs was great. All of the actors had fantastic voices with surprising vocal range, clearly well-suited for big numbers like the ones in Ride the Cyclone. The stage was beautiful. Hank Pine and James Insell were absolute geniuses in designing a minimalistic set which used colors and shadows to create a creepy backdrop while still implying that a larger and more elaborate carnival was there, just beyond the audience’s sight. I also really enjoyed the sound effects, especially the vocal effects used on the voice of Jane Doe (played by Sarah Jane Pelzer). Her ethereal, otherworldly voice really helped underline the fact that she had neither a head, nor an identity.

One final comment is about the use of multimedia, created by Miles Lowry and David Ferguson. I mentioned earlier that Ride the Cyclone’s use of multimedia demonstrated one of the big potentials of integrating multimedia and theatre – the power that images hold. Thanks to a rapid slideshow of family photos and videos, we were familiar with the characters histories as they were introduced for their showcase song, in a matter of seconds and without the character saying a word. The projection of Mischa’s (Jameson Matthew Parker) future wife was beautifully done by projecting images onto fabric which brought the video to life in a way I’ve never seen before.

Ride the Cyclone runs February 22 – March 10 at the Citadel Theatre. You SHOULD see it, because it is a beautiful study of the possibilities of theatre. And then, you should see it again in two or three years to see what it becomes. Tickets are $35 – $79.