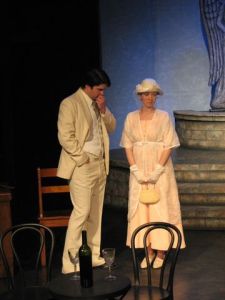 John and Alma Trying to Communicate

Summer and Smoke‘s run at Walterdale Playhouse ended February 16, 2013. Over the 10 day run, I had the opportunity to attend three times – the student preview night, the Sunday matinee, and closing night – and volunteered in the box office during the run. Ever since I began observing the production process in October, the production team told me that I would see huge changes in the play before the February opening, and even through the run. I have to admit I was a little skeptical; if everyone is spending months in rehearsal before the show starts, why – and how – would the play change over the course of 10 performances?

However, I tucked away my skepticism and decided to come to each performance with an open mind to see what happened.

It turns out, I was wrong.

Once the run starts, the director hands the play over to the stage manager. As Mary-Ellen said, “it’s her show now”. The production manager makes sure everything runs smoothly, that everyone hits their cues right and that the audience doesn’t realize it’s all highly choreographed, because nothing goes wrong.

It’s hard to verbalize exactly how the play grew – but, having observed the process from the auditions through to closing night – I can confirm that it did. By closing night, it seemed as though the actors were somehow even more in-touch with their characters. Even though I’ve seen the play many times, by closing night the gestures seemed somehow more natural, the accents less forced.

I was also surprised at how much of an effect the audience had on the way I experienced the play the three times I saw it during the run. I was fortunate to experience three very different types of audiences – during the student preview night, the audience reacted very similarly to how the production team did, laughing and being silent at the appropriate moments. The second time I saw the production was during a Sunday matinee, during which I sat in the sound booth. It was mostly an older crowd – which, I’m told is typical for matinee performances – and the difference in reactions was pretty large. One of the funnier lines of the production is when Alma says, “oh, I have a touch of malaria lingering on.” During rehearsal, this always got a laugh from the production team, but not so much for Sunday’s crowd, which was fine, but surprising. Closing night featured a real mixed bag as far as audience demographics go – I can’t categorize them into one group. What I found most surprising was how ready this audience was to laugh – they laughed at some lines that I hadn’t previously thought of as funny. Once again, the production team was right – the audience reaction totally changed my perception of the play, no matter that I had seen it several times in the last five months.

Observing the development of Summer and Smoke has been an amazing experience for me. Both the cast and the production team opened up their process completely to me, allowing me to get the full view of what it really takes to put on a play of this calibre. Throughout the play, I’ve evolved from being reasonably confident in my reviews, to having my mind blown about the complexity of producing a play, to feeling completely unconfident about my – or anyone’s – ability to judge theatre, back to feeling more confident about being able to review theatre. Overall though, I know so much more about theatre coming out of this process than I did going in, and I’m thankful to Walterdale Playhouse and the cast and crew for allowing me to have the experience.

To close off the series, I want to throw in a mixed-bag of my favorite moments (in no particular order) of going behind the scenes of Summer and Smoke: