When I signed up to review Where the Blood Mixes all I knew was that Lorne Cardinal, who played Sergent Davis Quinton in Corner Gas, my favorite “I’m feeling homesick” show, was in the production. I knew the play was about the effects the Residential School system had on those forced into it, however, I had no idea how this subject would be explored through performance, as most of my knowledge about the Residential School system has been acquired in a formalized classroom setting.

In reading the program after the play, I found a quote from playwright Kevin Loring:

“the biggest challenge [of writing the play] was trying to articulate these very deep dark themes in a way that would be truthful and yet not so painful for the audience that it would be intolerable. Knowing when to open up the darkness but also when to pour on the light, is the crucial balance of a piece like this.”

I couldn’t have said it better myself. No matter all the great components of this play – the stunning set, the skilled actors, the symbolic props, the great choreography – the power of the script shone through. I’ll admit, I walked into this play a bit nervous that I would spend the entire time feeling guilty for what my ancestors imposed on Native Americans. I worried that guilt would overcome me and I wouldn’t experience the story. But that didn’t happen, likely because of Loring’s conscious effort not to make the pain of the piece “intolerable”.

Instead, information about the Residential School system was presented as a fact, whereas in education this information is the REVELATION, the TRUTH, the FOCUS of all that a lot of us know about it. In presenting information about the Residential School system as a given and not allowing it to be the focus of the performance, Where the Blood Mixes allowed the audience to focus on the emotions and current experiences of those who are still struggling with the effects of Residential Schools. It may seem subtle, but this shift from thinking about the past to experiencing the present allows the audience’s reaction to skip the rational part of the brain – the part that categorizes people into “us” and “them” – and instead focus on the shared human experience. 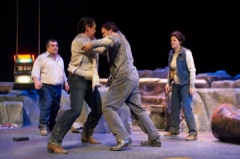 The production elements of Where the Blood Mixes were also fantastic. Set designer Cory Sincennes did an excellent job of transforming the Roxy’s stage into a set that was flexible enough to switch easily between a bar, a home, and a riverside in an instant. The amazing part about the set was that it was all composed of rocks and trees – upon walking into the theatre there wasn’t anything that would have been recognizable as an “indoor” setting. The set worked incredibly well, and reinforced the connection to nature that Native Americans have lost after having their beliefs “educated” out of them. There was also a great amount of depth to the set, which allowed the spooky skeletons of the sturgeon and eagle to move across the set, and which allowed the actors to have these great moments where their faces and bodies were only half-illuminated. These moments were often those where the actors were revealing their characters’ true feelings, and emphasized the point which Mooch makes, that Residential School victims were made to feel small, as though they should live in the shadows and outskirts of society. I was curious about the symbolism behind the skeletons, which are mostly visible during the scene transitions. According to Google, in Native American culture the sturgeon is a symbol of strength and longevity and represents the mastery of one’s emotions. On the other hand, the eagle is a symbol of “a state of grace achieved by… reclaiming our personal power.” I’m not going to explain the significance of this symbolism, but finding this information after the play really helped me understand the underlying themes. If you’re reading this review before the play, think of what each of the skeletons represents when they appear.

It almost goes without saying, but the acting in Where the Blood Mixes was fantastic. While I wanted to see a little more emotion from Sera-Lys McArthur (Christine), the cast was very strong in general. Lorne Cardinal (Floyd) surpassed the expectations I had going in, and revealed the layers of his character’s pain so well that the transformation from the first to last scene was incredible. Michaela Washburn, in the role of  June also took the audience through an incredible emotional transformation.

Walking out of the play, I’m not sure I understand the Residential School system any more than I did walking in, but I now have a much better understanding of the effects it has had on generations of Native Americans. Where the Blood Mixes plays at Roxy Theatre February 12 – March 3 and is a must-see. See YEGLive.ca for the schedule, or visit Theatre Network for tickets ($25 – $29).