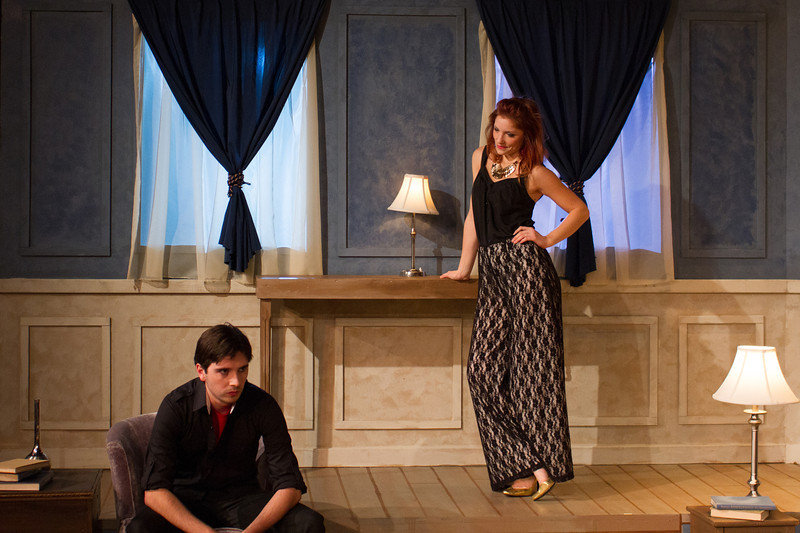 Ah, The Misanthrope. Molière’s dialogue-heavy, critical look at 17th century French society, adapted in 1996 by English playwright Martin Crimp. Don’t come to this 2 hour play tired, without your full mental faculties, or disparaging about humanity, because you’ll miss the humour of this play, which takes a look at our modern society – and, specifically, flaws we all have – including how we point those flaws out to each other.

As I mentioned in my preview, I’ve seen a previous incarnation of The Misanthrope but didn’t understand it at all. The dialogue was too fast, the anger of each of the characters too over-done for me to connect with both the characters and the story line. Fortunately, this was not the case with Walterdale Playhouse’s version of The Misanthrope. If you’re able to keep up with the rapid-fire dialogue, this play will have you laughing and leave you thinking.

The Misanthrope is inherently an “angry” play – each of the characters is mad at each other, or at the larger “society” – and with good reason, although it takes a bit of digging to get to why they are angry. In the role of Alceste, Brennan MacGregor does a good job of walking the line between true indignation and comical outrage. It’s very easy to over-play a character consumed by one emotion, however, even though Alceste’s primary emotion is anger, Brennan created many different “shades” of his anger through his mannerisms, posture, and vocal tone. The only complaint I had was about the scenes where Alceste is extremely angry. Throughout the play, with regards to Alceste’s indignation at various characters and plot points, Brennan escalated every aspect of Alceste’s character – his gestures, his vocal volume, his speed of response. But when it came to the scenes where Alceste was angriest, the vocal tone and volume did not seem to match the play’s previous escalations, instead using a deeper tone and not nearly loud enough for the anger his body was portraying, giving me the impression that he was trying to control himself, which is a very un-Alceste thing to do. Those strange moments aside, Brennan does a great job as the lead character.

The supporting cast was also great, full of some of my favourites from Edmonton’s theatre scene – the incredibly flexible Zachary Parsons-Lozinski in the role of Alceste’s best friend (if you caught him in Dog Sees God or Miss Julie this year, you’ll know what I mean), Amanda Neufeld showing her chops in a non-musical show as a cut-throat journalist, and the beautiful Kristen Finlay doing double duty as a jealous acting teacher and the production’s Master Painter. When I walked into the Walterdale’s playing space, I was taken aback at how beautiful and appropriate the set was. Talent of the actor’s and production crew aside, the set might have just been my favourite part of the play. Kristen’s painting created an absolutely perfect backdrop for the play – the design looked as though a 17th century French room (an hommage to the original play) had been transported to 2012, yet was still modern enough to pass as an up-scale London hotel room.

While the subject matter is heavy, this rendition of The Misanthrope was a witty, absorbing social critique brought to life by a team of talented young actors.

The Misanthrope plays at the Walterdale Playhouse December 5 – 15. Check out the full schedule at yeglive.ca. Tickets are $12 – $18 and can be purchased at Tix on the Square or at the door.