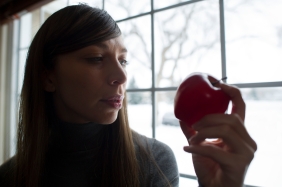 The List is likely one of the most moving plays I’ve seen this year. As the house lights went up, following the performance, I let go of the breath I had been holding for who knows how long. Leaving the theatre I had to stop to re-collect myself before continuing on (ironically, to go help a friend). The List is nothing if not intense. Those are my favorite plays – the ones that leave you breathless at the end, not knowing whether crying or laughing will make you feel better.

Walking into the Westbury Theatre, you’re met with a cube created by white curtains, with something scrawled on them. What is it? Oh, just the day-to-day tasks the narrator – or any one of us – has to do to get by. Walking into the cube, you’re walking into the narrator’s kitchen – all in pristine white. Clothes, paper, and laundry hampers  – all white – are strewn throughout the room. You take your seat one foot from the edge of the playing space. What’s so great about this set, designed by Brian Bast, is that it’s so versatile – it’s used to provide a visual to the unending space that surrounds – and suffocates – the narrator. It provides an insight into what’s written on her numerous lists. It shows us her memories when she recounts various moments since she’s moved out into the country.

Melissa Thingelstad, in the role of the narrator, was absolutely stunning. As you enter her kitchen and take a seat, she makes eye contact with you and continues to scan the rest of the crowd – nervously, suspiciously. That, combined with the quiet music (designed by Paul Morgan Donald) that greets the audience, somewhat reminiscent of the cellphone ringtones for calls, reminders, or alerts, immediately unsettles you.

It would have been easy for Melissa to overplay the narrator as a crazy, stressed-out, mother of three. However, Melissa dialed it back enough to make it believable, while still providing a frightening examination of our current human condition. Her frequent switches between a woman who has been pushed over the edge and one who conforms to society’s expectations of mothers add just enough to her mental stability that you’re never sure if you can be completely comfortable with her.

The best part of Melissa’s performance though, was the way her acting tied together the other production elements. The play takes place in a fourty-seat kitchen – the audience is literally one foot away from the edge of the stage. Melissa makes full use of this “forced intimacy” – I can’t count the number of times her piercing eyes met mine. It made me uncomfortable, it made me more emotionally-involved in the performance, and ultimately, it made the play for me.

My final thoughts? Take a break from making lists to get you through the holiday season, and go see The List.  The play uses the medium of live theatre perfectly to make us reflect on our own lives – it might be scary, or at least challenging, but it’s definitely worthwhile.

The List runs until December 9 at the TransAlta Art Barns.  Check out the full schedule on YegLive.ca.  Tickets for regular performances are $15 – $27.