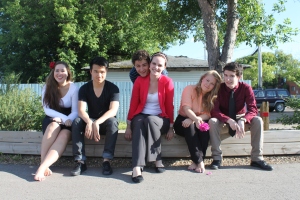 The cast of I Love You Because. From left to right: Robyn Kumish, Antony Hall, Steven Angove, Mackenzie Reurink, Jilian Willems, and Stewart Bartlett

Love can suck. It can throw you down, lift you back up, then stomp on your heart. It can make you happy, sad, illogical, or just plain confused, without any rhyme or reason. And I Love You Because, produced by Three Form Theatre  (formed in April 2012), is a beautiful musical exploration of everything love does to us.

I Love You Because is a tale of trying to find love in New York, inspired by Jane Austen’s book, Pride and Prejudice. Although Pride and Prejudice is one of my favourite books, if you haven’t read it – or are a little rusty on classic literature – don’t worry. The ties to the book are, for me at least, hard to see, especially when you’re being blown away by the powerful story told on Three Form’s minimalist stage.

Each actor shines in I Love You Because – from singing to well-timed but misspoken clichés, the cast delivered most notes and lines perfectly, and many threw in the extra flares that make a production special. The principal actors (as you expect in a play) are powerful singers and great actors. Every actor showed their character’s growth through their mannerisms and demeanour – from shy to confident (Steward Bartlett) or demanding to understanding (Mackenzie Reurink).

However, as I discovered last week, it was the supporting characters that took the production from a flat story about four characters to the tale of what it’s like to try and find love in general. Of note was Antony Hall’s (in the role of NYC Man) easy transitions between a variety of different characters. While he didn’t make dramatic costume changes, his changes in demeanour, posture, and even accent demonstrated his robustness, and made the play feel as though it wasn’t limited to 6 actors. While every actor had a good vocal range, I have to say that Robyn Kumish (in the role of NYC Woman) stood out to me. Something about her vocal tone (or maybe it was the sweltering heat of Catalyst Theatre) gave me shivers. Unlike Hall, the role that Kumish played was more or less static throughout the play, but gave a glimpse into her acting abilities. I’d like to see what Kumish can bring to a  larger and more dynamic role.

Tying I Love You Because together was the fantastic piano accompaniment provided by Arielle Balance. Balance’s accompaniment was so flawless that I didn’t realize until the end of the play that the music was being played live. The contrast between the classical music, played on a classical instrument, and the story of modern day love set to this music, was an interesting dynamic. While  the setting and language was modern, the music helped link between Pride and Prejudice and I Love You Because while providing an auditory reminder of the universality of the plot.