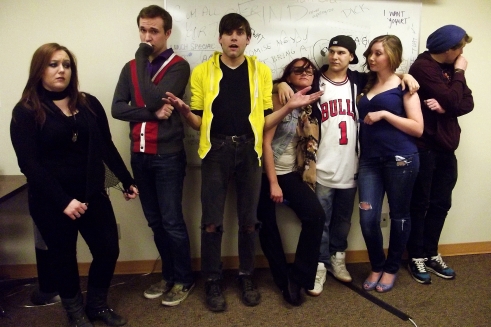 Edmontonians – if you only see one play this year, make sure it’s Dog Sees God: Confessions of a Teenage Blockhead, playing May 17 – 27 at PCL Studio Theatre. Dog Sees God violently  knocked off Hunchback as my favorite production of the last 2 years, leaving my head spinning, having re-discovered  this is truly what theatre is supposed to be.

Excellent theatre makes you see life in a new way. It challenges your assumptions, shows you situations you’ve never experienced. It makes you laugh, cry, and gasp… sometimes at the same time. Dog Sees God did just that. I walked out of the theatre, turned to my fellow critic Ana Osorio and wasn’t sure how to react or what to say. My heart was pounding, I wanted to cry (but laughed awkwardly instead… weird, I know), but most of all, I wanted the world around me not to be so raw.

We hear about suicide, drugs, bullying, the difficulties of discovering one’s sexuality, eating disorders, mental disorders, anger management issues, and abuse in the news all the time. However, Dog Sees God is a different type of social commentary on these issues. Written by Bert V. Royal, Dog Sees God takes an “unauthorized” look at what happens when the characters of the comic strip Peanuts grow up in a world where adolescents are over-eager to be adults. The play confronts you with the realities of today’s social issues- through actors who completely flush out their characters, but don’t go over the top in their portrayals. The results are heartbreaking, but give an opportunity to take a deep look at our own lives – even though adolescence is long over for most of us. What do the words we use say about us? What are the true reasons behind the things that we do? Are we lashing out at someone not because of them, but because of ourselves? And, above all, is this truly the way adolescence, or life in general, should be?

The best element of Rabit Marmot Production’s take on Dog Sees God was the casting. Often,when an actor is playing a character experiencing a  personal problem the actor overplays the part, taking the portrayal of the problem a step further than it needs to be. This was not the case in Dog Sees God. The actors portrayed their characters as being fully three-dimensional – neither completely broken, nor completely all together. Walking the fine line between under- and over-emphasizing the issues each particular character faced is what made this production shine. The actors, the director, and the technical crew behind the production didn’t focus the play on one particular character, but instead on their collective experience, resulting in a much more powerful production than it would have otherwise been.

It’s hard to select those who stood out in a production that blew me away, but a few actors threw in extra flares. In particular, Cayley McConaghy (C.B.’s sister) – whose pairing of physical movements to the description of a caterpillar’s metamorphosis into a platypus were both perfectly timed and artfully crafted. Additionally, while playing the more minor role of a stoner named Van, the expression Evan Hall portrayed through his eyes – through wistful stares when talking about his blanket, or furtive glances when sneaking off with C.B’s sister – were the extra step it takes to make a character seemed fully formed. A final mention goes to Zachary Parsons-Lozinski who did an excellent job playing the broken and lonely Beethovan. Watching Lozinski’s portrayal of a teen who has been abused and bullyed physically made my heart ache.

In short, Dog Sees God: Confessions of a Teenage Blockhead is not an easy play to watch, but isn’t that exactly what theatre is supposed to be?