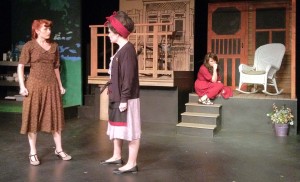 If you could talk to a younger version of you, one that hadn’t yet achieved all the successes and regrets as the current version of you has, what would you tell her? Would you say that going to Frosh was the best decision you made in university? Would you tell her to stay off the roads on December 22nd, 2009? Albertine in Five Times explores the life of a woman in five different decades of her life, through five different actors all telling Albertine’s story.

Director Mary Jane Kreisel expands on what audiences can expect from the play: “It’s a play that mixes what you might call, comedy and tragedy. Much more on the humanistic level – examining life, and the raw realities of life … The punches are not pulled in this play. It’s one of those plays that makes you think about, perhaps, things that happen around you that no one ever wants to talk about… Although, it has that realism to it, but also a huge amount of stylism because, of course, we have one woman played by five actors, and [additionally] we have her sister. It sort of confounds time and space in sofar as we have people from five different ages – ranging from when [Albertine] was 30 up to when she was 70 all playing on the stage at once…  Then we have her sister who talks to everybody throughout the entire play. So, she’s actually in a timeless position. She starts at age 30, but then she talks to everyone all the way up to her sister at age 70. Ironically, when she talks to her sister at age 70, she has been dead for 20 years. So, time and space is confounded. But it has that element of looking at choices – life choices – and that’s what the playwrite was trying to have us examine.”

The fantastic set design emphasizes the mixing of space and time – with each era (1942, 1952, 1962, 1972, and 1982) having its own backdrop. The Albertine of that era calls that area of the stage “home” but also interacts with Albertine at other stages of her life.  Kreisel explains: “[Albertine at 70] is questioning choices that were made. But what’s interesting about that is that she’s not the only one who’s questioning. The various characters question each other and criticize each other’s choices…  in many ways, the characters take lives of their own as they question, critique or agree with one another… The idea is to understand choices. The idea of choice is interesting insofar as we often think we have free choice. And we often think that if we went back, if we only made a different choice, that our lives might be different. In this particular play, the choices are much questioned and it almost seems as if her life is pre-determined. There is the question in the play: Do we have free choice, or are [our lives] pre-determined?”

It’s an interesting question. One that isn’t answered in the play, but leads to another, much more difficult question posed by Kreisel: “At the end of a hard life… Can we reconcile a hard life? Can you accept a difficult life and somehow reconcile the choices that were made? Even though some of them were highly questionable. Can you reconcile them?”