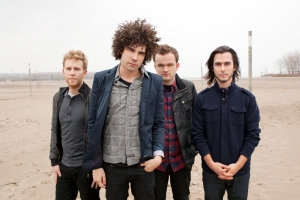 Someone once told me Canadians tend to exaggerate, and generally, I agree. However, the only word I could think of to describe The Midway State’s performance on Saturday night at The Haven Social Club was “epic.” And not “epic” in the way I use it on a daily basis (“I just wrote an epic paper!”) – epic in the way it’s actually intended to be used: “majestic; impressively great.” (“Wait, so you mean my paper on labour relations in France wasn’t actually epic?”) What I mean is that The Midway State’s mixture of lights, echoic vocals, and reverb-laden guitars left me feeling much the way I expected to – enthralled by their nostalgic rock music. The Midway State’s set contained a good mix of the dreamy-rock music I expected, as well as their harder-rocking songs. One aspect contributing to The Midway State’s epic performance was the lengthy instrumental sections, that transfixed – or hypnotized – me, transporting me away from The Haven and into a universe where anything is possible. A great example of this was an interlude in the middle of “Paris or India.” However, while the detour from the album version was beautiful, I’m not sure why they chose to perform it in the middle of the set, as it seemed to dampen crowd’s mood a little. Despite the band member’s obvious talent displayed in the instrumental interludes, the songs I where I thought The Midway State shone were those with a stronger rock influence, like “Fire” or “All Anew.” In performing these songs, The Midway State seemed to let loose, disregarding technique and letting the music sweep them, and the audience, away.

Equally as entertaining and talented as The Midway State was opener Shawn Hook. Despite his young looks, Shawn Hook has a distinctive blend of electronic rock music – one that incorporates piano and acoustic guitar with electric guitar, synthesized music and drums, sometimes all in the same song! Following the first several songs he performed, the venue was in a hushed silence, as if asking, “what is he going to surprise us with next?” While that might sound slightly schizophrenic, Shawn makes it work in a mesmerizing way – check out his first single “Every Red Light” or “Dirty Little War” if you catch him live. Shawn’s music has a big band sound, but not in an annoying “I’m a MUSICIAN” way… in a way that says, “I’m here to have fun and to make you dance”… and maybe even change the way you look at electronic or pop music. I often catch myself apologetically saying to my friends, “I like pop music… really terrible pop music.” If more musicians played like Shawn Hook, maybe I wouldn’t have to apologize for the pleasure I derive from pop music. A final note on how impressed I was by Shawn’s performance – his stage banter was spot-on! His easy-going soliloquy’s between songs captured my interest, but probably the best line of the night was his substitution of “… and I’m a bad boy… because I just broke my guitar string” during his cover of Tom Petty’s “Free Fallin’”.

The Midway State are touring with Shawn Hook until December 17 in various venues across Canada. Dates and locations can be found on The Midway State’s website here.