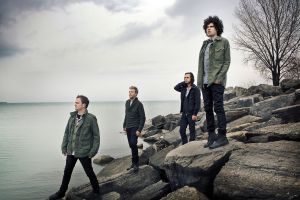 I was introduced to The Midway State in 2010 by my “Never Again”-obsessed roommate, who changed the song to her ringtone. Listening to The Midway State’s music reminds me of that time – everything was bright and shiny, yet I knew I was seeing the world through rose-coloured classes. I knew I was “living the life,” and that it probably wouldn’t last. That’s still what I hear when I listen to The Midway State’s new album… but I think they’re saying screw it –if it’s all going to end, we might as well celebrate now.

The Midway State’s music is for dreamers and rockers alike. Their music sounds like they’ve already “made it.” It makes me feel nostalgic and excited for the future at the same time… When I close my eyes and listen to it, I can see the band performing in a stadium, to a huge crowd of fans. And right now, the crowd that I’m imagining, is bigger than the fanbase they currently have, so those who are into them right now get to experience them in intimate settings like Haven Social Club.

Saturday night, I want to experience the dreamy-ness of their music… I want it to touch my soul at the Haven, but at the same time… I want a dance party/mosh pit started on the dance floor. I want to be so inspired, and so enthralled, by the music, that I can’t not dance. And I think that is entirely possible. Every song on The Midway State’s new album, Paris or India is a blend of Nathan Ferraro’s voice which somehow simultaneously exudes confidence and vulnerability (see “Fire”), backed by guitars and drums that you can’t help but move to.