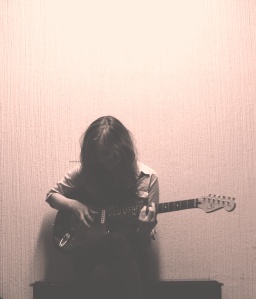 If the apocalypse requires a soundtrack, Jessica Jalbert’s upcoming album Brother Loyola (to be released October 25) might just be it. According to Jessica, listeners can expect to hear “a lot of songs about mortality, rock and roll songs as well as borderline folk songs… The album is all over the place. But, there are some songs that are straight-ahead rock and roll, some songs that are kind of folk-y, there’s one song that’s borderline metal – it’s really, really loud. I wouldn’t call it metal, per say, but maybe some sort of psych-sludge. I don’t know what people’s reactions will be to [the album], but hopefully they’ll like some of the songs, if not most or all.”

A glance at the upcoming album’s track listing might leave you surprised, with track titles such as “Necromancy,” or “Aubrey de Grey,” (a famous scientist). Contrary to the meaning of the word, “Necromancy” imagines “how someone would feel, knowing that everything’s over pretty soon. Or that the world is going to end, but, it’s not really an apocalypse song – it’s also about people being obsessed with their fate, or their death. I’m not a morbid person, but a lot of songs on the album are about dying. It’s not supposed to be morbid. Dying is a pretty crazy thing to think about – it’s so universal, but it’s so terrifying.” I mention it’s interesting for her to be composing songs about dying given that 2012 is coming up. Jessica laughs and responds, “You know, I wrote the song in 2009, but I didn’t start performing it until 2011. I guess it’s like, ‘okay, less than a year to go!’ I played a show in Saskatoon the night of the rapture and we ended with that song. It felt… ironic and funny and worked perfectly.”

I asked Jessica what was behind “Paris Green” – Jessica explains, “Paris Green is a pigment that a lot of famous painters used to use… it’s the deepest and most long-lasting green pigment. But, it’s actually very poisonous – it’s a form of arsenic. Very few painters will use it anymore… They now use it in Paris to kill rats… It’s just basically the idea of something beautiful and dangerous… I found the word in the dictionary, and I thought it was very interesting when I read about it. Basically, I wrote the song about Paris Green – it’s not necessarily literally about the pigment, more the idea of it… You can take it in a lot of directions.” Jessica just finished shooting a music video for “Paris Green” – the video will feature landscape shots similar to old, classical paintings – the focus will be on the landscape, with the band being part of the landscape, not the main focus of the visual. “I got to take the band and Mike Robertson [of High Wire Films, who shot the video] to the ravines I grew up in as a kid… It was the first time that music and nature have come together for me.”

The song “Lack of a Lake” (one of my favourites, due to the message and the rolling rhythm) references her love of nature, and how important the natural world is to her. “It’s hard to remember that humans are animals, and animals have lives and habitats too. That’s forgotten a lot of the time. For me, I’ve spent a lot of time surrounded by the animals I mention [in the song] and all of those animals are beings… I think that feeling a connection to the animals and to nature is important for human well-being.”

Jessica already has her eye on another album, now that she’s had some experience in the studio. She says, “I knew nothing about the whole process a year and half ago. [At that time,] music was so different for me. It was just me sitting at home writing songs because I wanted to impress my songwriting friends… the next time we got together, I wanted to show them something new. But now, writing songs, I can kind of imagine what can take place in the studio or how I can get other instruments involved. It’s way more arranging than just writing.”

Brother Loyola comes out October 25. Anyone who pre-ordered the MP3s on Bandcamp will get them on October 25, and the pre-ordered vinyl records and CDs will be mailed  that day. The CD release party is Friday, October 28 at Wunderbar. Jessica will also be opening for Born Gold on November 3rd at The Artery.