By the ironic eyebrow of Aries! Get yourself to Trent Wilkie’s Book on Tape – playing in the PCL Studio at the TransAlta Art Barns October 6-9 and 12-15. Book on Tape is a thought-provoking and subtly funny play about a (perhaps) not-so-distant future.

In the program, director Taylor Chadwick (whom you might know from Mothership Down at this year’s Fringe) says, “people are starting to see the world through a screen. Interactions with human and otherwise are localized to a convenient easy to look at image. Pretty soon we won’t even need to meet each other… It’s not just our identity or humanity that is at stake.” Book on Tape was an awesome exploration of that assertion. Jen Bennett (Joleen Ballendine)– a “friend for hire” with no offline friends – is destined to save the world, and time-travelling Targ Wildstar (Trent Wilkie) is there to make sure this mission is accomplished. Joleen Ballendine’s stoic irony (if you saw her in NextFest’s Subterranean this summer, you’ll know what I’m talking about) is perfectly offset by the naïve enthusiasm of Trent Wilkie. This interplay between the characters is perfect in suggesting that going to Mars will cure Jen of her negative outlook on human interaction. Although she doesn’t really believe Targ, being so desperate to escape the monotony and loneliness of everyday life, Jen decides “why the hell not?” and signs up to travel to Mars. 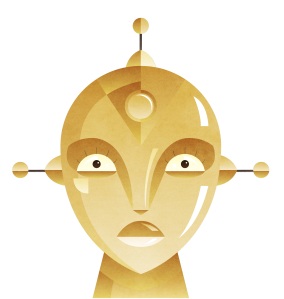 Book on Tape stands out because of the meticulous planning and thought that went into exploring the theme through all of the production elements. Book on Tape has a screen on the stage, where characters such as Declyn Explodingmountains (Taylor Chadwick) appear, brought there by a futuristic communication device. For me, the difference between movies and live theatre is the intimacy established by knowing that you are in the same room as the actors, and you have a choice whether or not you join their fictional world. Book on Tape explored this belief for me. Is the audience as affected by Declyn Explodingmountains in the same way as they are affected by Jen and Targ’s story? I don’t think so. Although Declyn is not intended to be a key character in the story, his appearances are brief interruptions in the development of the relationship between Jen and Targ. I didn’t feel connected to his character, because he wasn’t really there. I don’t care what he was fighting with his mother about. And maybe that’s a reflection on how we feel about people that we only see “through a screen.” Jen doesn’t truly care about her online “friends” – but, even though she is a self-professed “loner,” Targ’s fate concerns her. Can online – or onscreen – interaction replace face-to-face relationships? Book on Tape suggests not.